This is part three in Kerry’s series around Neurodiversity. You can find parts one and two below.

“Play must be the right of every child. Not a privilege. After all, when regarded as a privilege, it is granted to some and denied to others, creating further inequities. Play as a right is what is fair and just. Although children will engage in play differently, play is a child’s right” (Souto-Manning, 2017)

The United Nations Convention on the Rights of the Child (1989) states in Article 31 that play is the right of all children, yet if we think about it, play is something that we continually have to defend. Through self-directed play, children gain many things, including joy, learning, and engagement. This is no different for neurodivergent and disabled children, yet the common trope is that play does not come naturally to children whose development diverges from typical norms. This is simply not true, and increasing research challenges this idea that play has to progress a certain way to be considered valuable. For example, even though autistic children’s play is often pathologised, meaning we tend to confuse play behaviours as symptoms of their neurotype, it is during play that autistic children will communicate more often and show their most advanced forms of language (Chang, Shih, Luanda Kaiser & Kasari, 2018). The work of Jeffrey Trawick Smith (2019) points to many examples of diverse play, and his compelling argument is that we have to stop thinking there is a right or optimal way to play. Instead, we embrace that play has endless possibilities, and as practitioners, we need to get comfortable with the fact that it might not always make sense to us immediately. When observing play, we must be curious enough to keep watching by “tuning in and zooming in” and deconstructing what we think play should be.

So many efforts have been made to define play, but the truth is, it should not necessarily require an operational definition. According to Eberle (2014), trying to functionally explain play can create patrols and borders around play which can be limiting. He suggests that we should find comfort in accepting that play opens a vast space of potential and can transcend in many ways. This idea of expanding our play borders could potentially allow us to think more broadly about the types and features of play, leading to more inclusive approaches for neurodivergent and disabled children.

Practitioner’s Voice:  I had observed a child who always remained in the construction corner. He didn’t play with the blocks or toys in that space. Instead, he seemed immersed in stroking his hands and fingers across the shelf worktop. As I watched, I realised that he was fascinated by the shadow and light reflected on the worktop. He would run his fingers along the edges and points the sunlit hit.

Because children learn through play, many educators are trained to view it as something that needs an outcome or measure. This is particularly true in early intervention and the rise in “play-based” interventions. This is deeply problematic because it is underpinned by several deficit discourses:

The key question for me over recent months has been how do we affirm children’s play and their identity? If play and play-based interventions are viewed through a deficit lens, we risk reinforcing to the child that there is something inherently wrong with who they are. For example, during many play-based interventions, we may provide positive reinforcement to children when they do something neurotypically, such as sit still, provide eye contact, or functionally use a toy. And so, what we are essentially communicating to a child is “I like it when you do think “normally”, do more of that”. But what if they, by their nature, do things differently?

Parent’s Voice: I realised that our house was a treasure trove of adventures for my child. To us, how boring a shoe cupboard is, but he would become so concentrated in his efforts to empty and throw the shoes. Previously, I would try to re-direct him because I thought it was boredom causing misbehaviour. But then I noticed that “destruction” was his favourite thing. He loved throwing and catapulting things, seeing them land, and hearing the auditory feedback. True, I don’t always know how to extend his play, but sometimes I lean into the fact that play for play’s sake is so important. Not everything needs an outcome.

This may feel like a complicated concept to unravel, but I have found that it really is about going back to basics. Rather than defining play, I have focused on how well we honour the features of self-directed play in neurodivergent and disabled children. Review the table below of key features, and reflect upon the following: 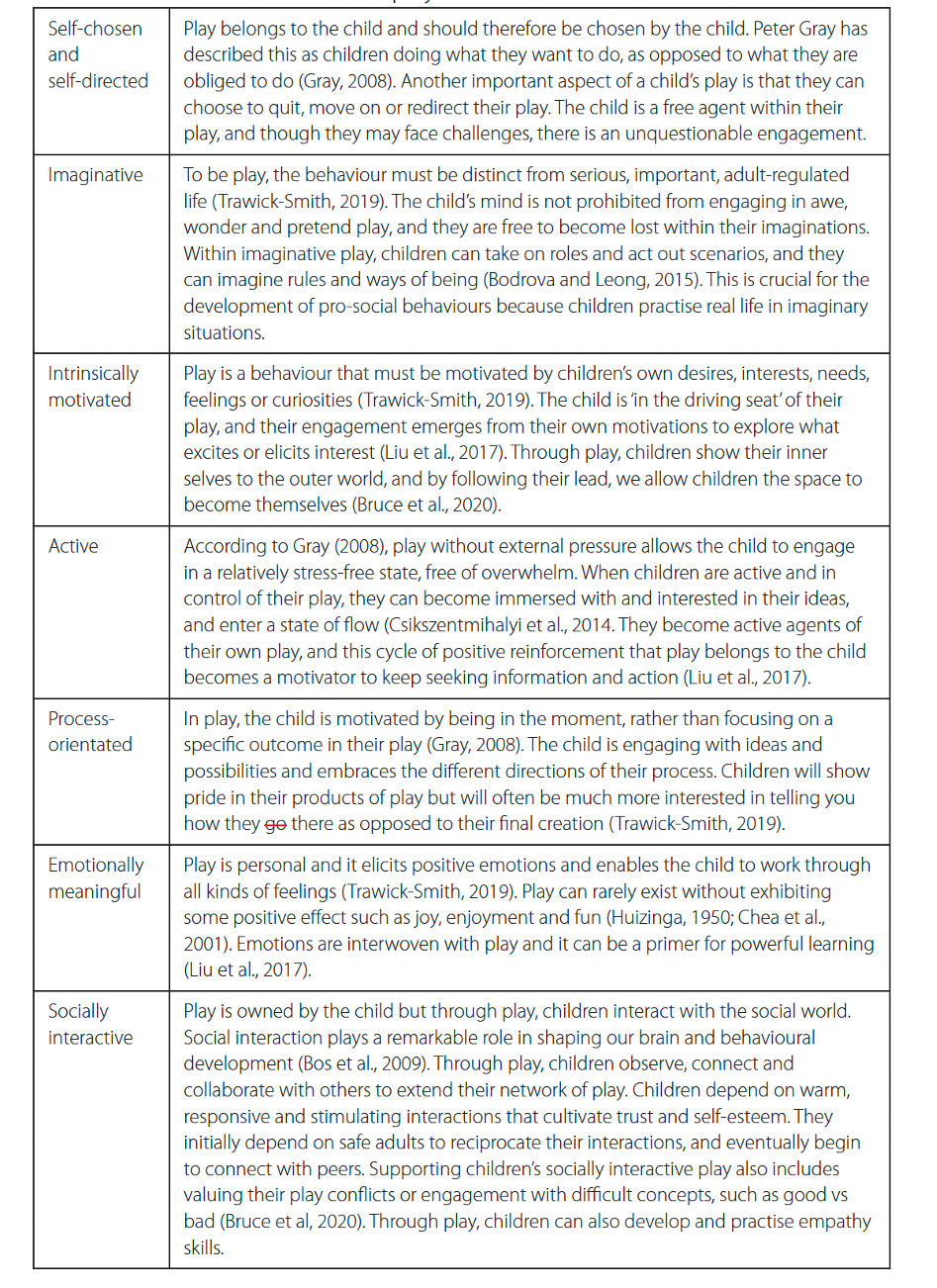 Did you know? In a recent scoping review by Gibson, Pritchard & de Lemos (2021), they reviewed play-based interventions for social and communication outcomes. They found that out of 388 studies, none were explicitly strength-based, meaning that they did not acknowledge and celebrate autistic individuality in play or build upon personalised preferences.

What next for play?

We know that many neurodivergent children have special or intense interests. The pathology paradigm suggests we need to “wean” children away from these as it’s unhealthy. We do not, and it is not. Eliminating interests from play experiences reduces engagement and enjoyment. And you don’t learn much if you are not engaged. Interests become hooks for learning. The speech and language therapist, Katja Piscitelli (Instagram: @BohoSpeechie), suggests setting up special interest groups for children to have self-directed time to engage with the things that ignite their passion.

Play and why need to stop running around like headless chickens

Being available is one of the most crucial aspects of understanding the diverse play. And I know that the idea of having time just to be with children is considered a luxury in an increasingly fatigued and pressured workforce. But, out of everything, time, where there is no adult agenda, to-do list, outcome, or intervention, is what we need to prioritise. In one nursery, they explained that ratios were so tight, but they committed to allocating staff at least some time across the week to engage in play uninterrupted. Even this small shift opened greater discussions. And what’s more, practitioners reported greater levels of wellbeing when they had the freedom to “hang out” with children.

You can download this from eyfs4me.com, and it is just a way for us to keep track of actions, behaviours, interests, and fascinations to look for patterns and connections in play. For example, one practitioner explained how she used this and discovered that a child was fascinated by rotation and would seek out experiences that involved spinning, turning and twisting. This included whole-body movements, and together the adult was able to connect with the child through mirrored play. 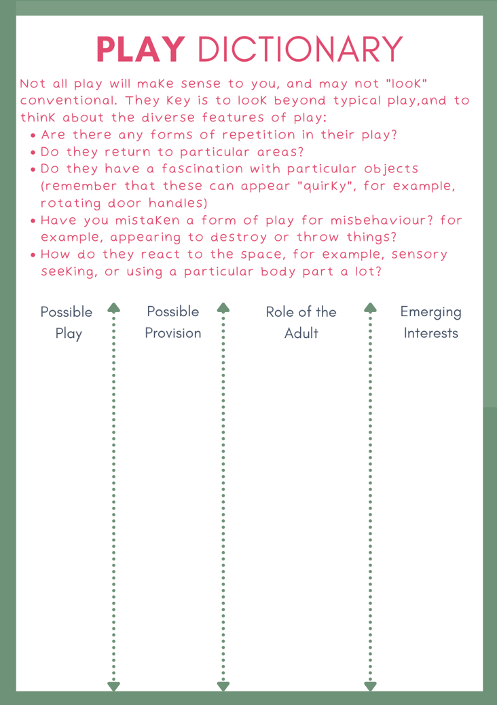 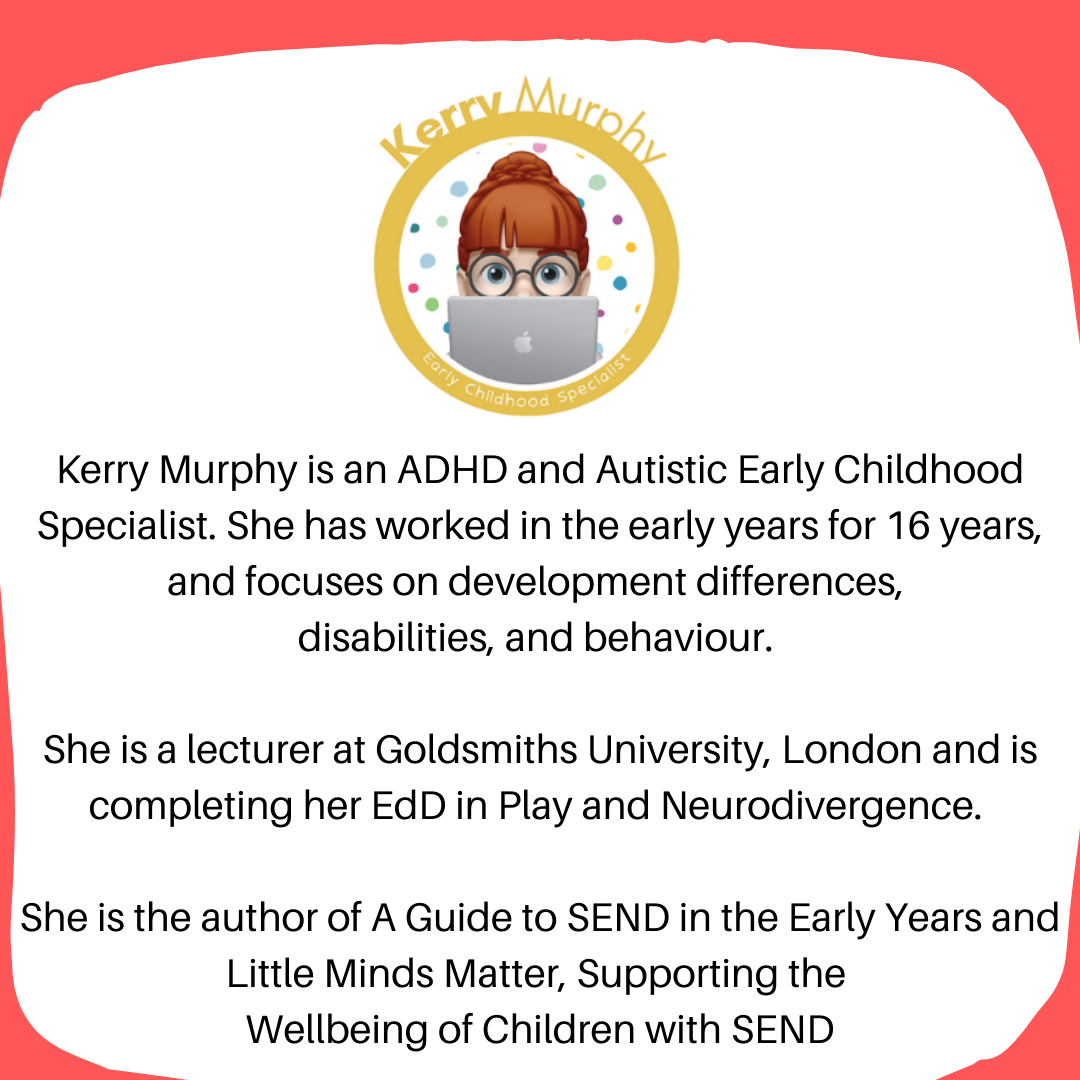