This week the  blog has been written for me by  Clare Thompson. Clare is an illustrator and visual story teller, and like me, is based up here in the North West of England. She uses a mixture of handmade techniques and digital media to create pieces of art that also translate into picture books for children.  You might have seen Clare’s work on my Facebook and Instagram pages as from 2016 she has been working with Naturally Creative Early Years Consultancy and has created books like Junk DNA that I often see popping up in people’s Loose Parts and Transient Art Areas.

I have made the images nice and big in the blog this week so that we can really enjoy looking at Clare’s work! You can find out more about Clare and her art here.

Over to you Clare…

From cleverly constructed picturebooks such as David Weisner’s Flotsam to longer format graphic novels like Shaun Tan’s The Arrival, wordless books allow for immersive storytelling experiences that are unique to each individual reading. They place the reader in the role of narrator; inviting them to draw on their own vocabulary and experiences, make links, build ideas and become an integral part of the storytelling process in a way that is naturally inclusive. Readers can respond at their own level of experience and understanding and draw meaning from visual cues in ways that are individual to them. Wordless books therefore offer huge potential as a means of sparking expressive language, imaginative storytelling and sustained shared thinking on many levels. 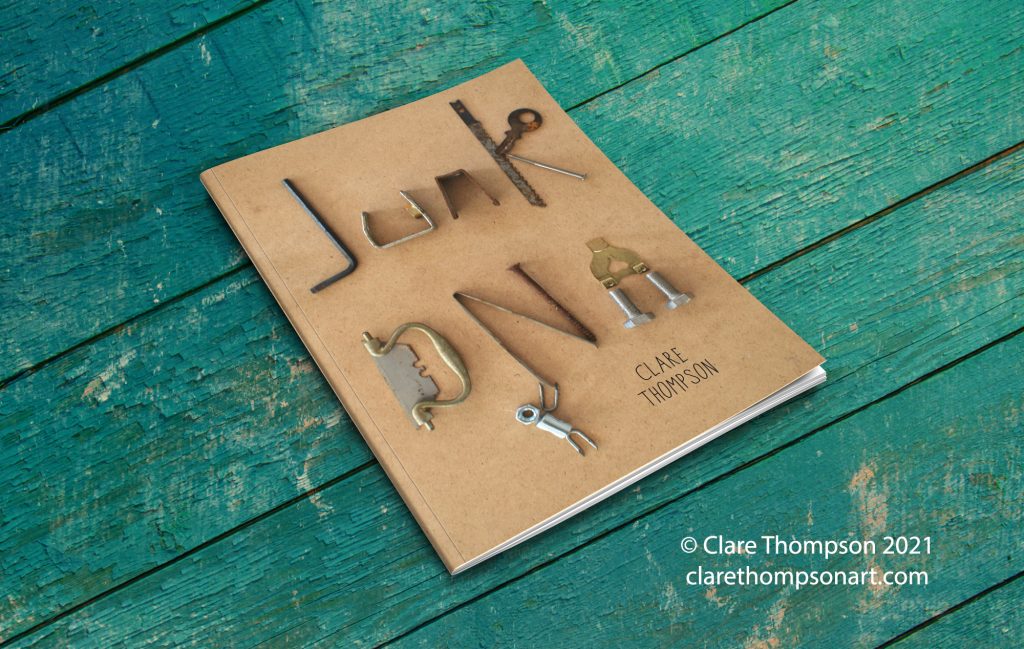 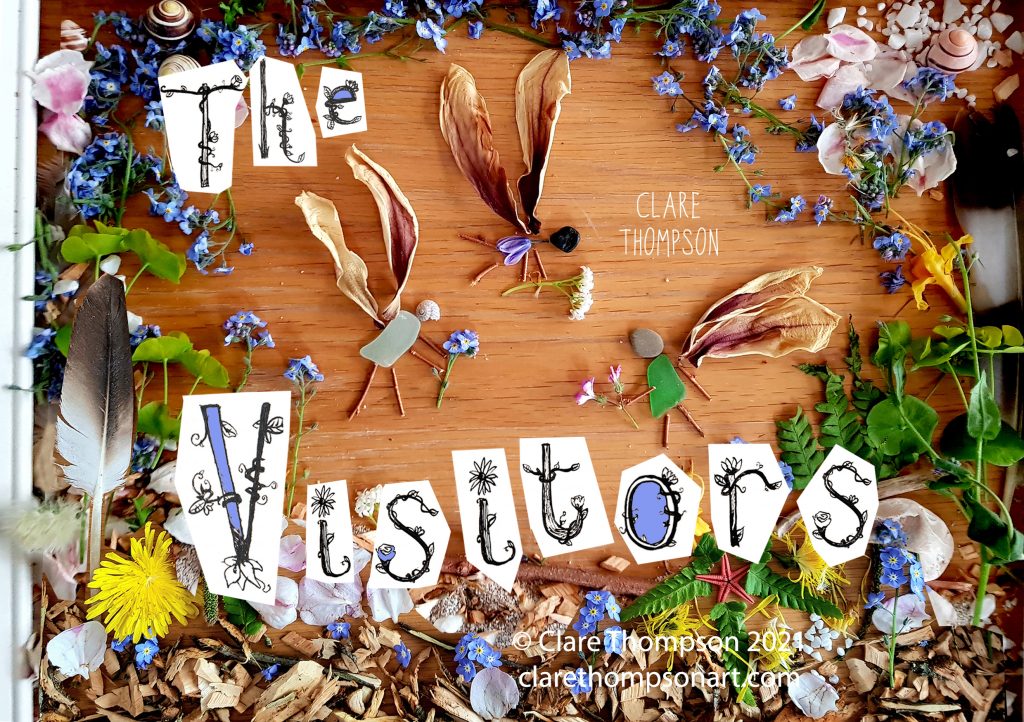 When making wordless books Junk DNA and The Visitors, I wanted to harness this potential for reader response in every aspect of the creative process. I have always loved experimenting with loose parts and been fascinated by the myriad possible outcomes held within a “pile of stuff”. I thought that if I could demonstrate this fascination within the method of creating the wordless stories, it could maximise their power as inspiration for creative play. And so, this led to the process of creating transient tales. 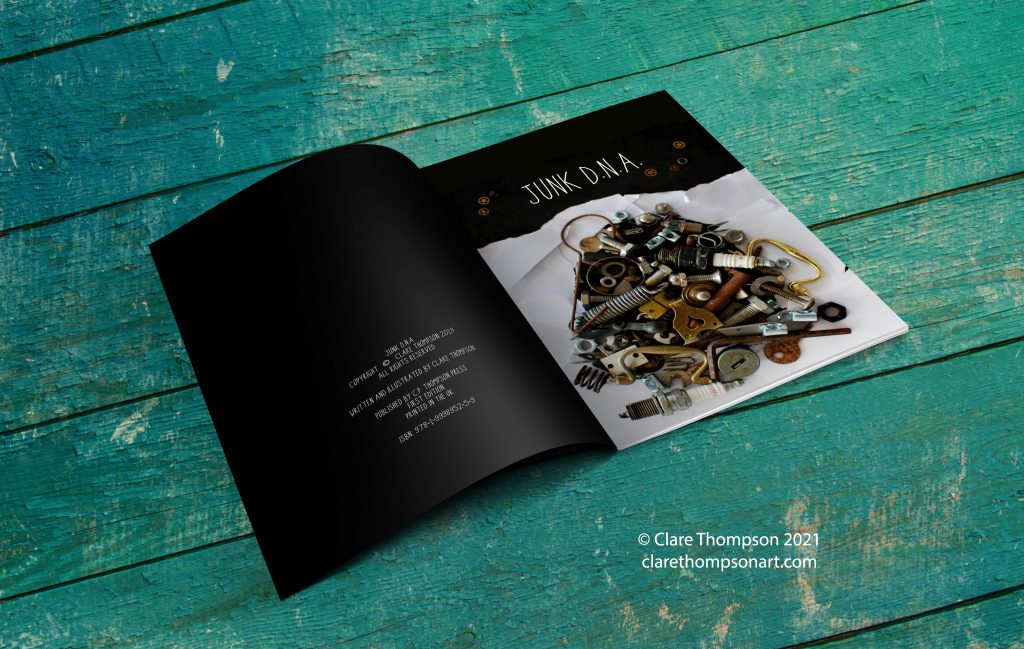 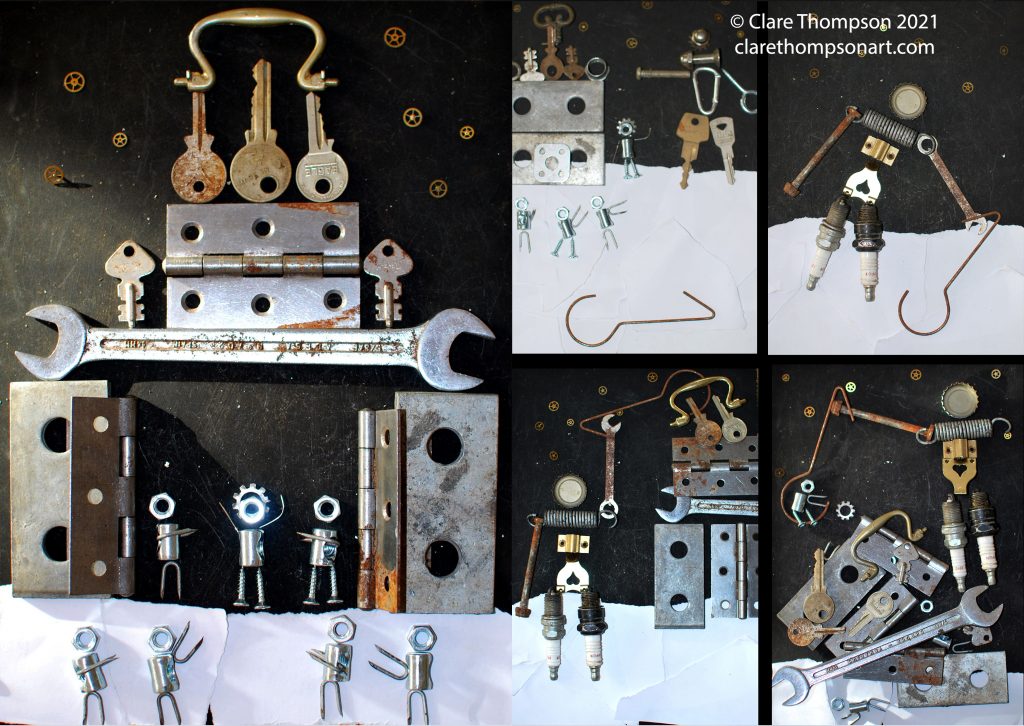 The artwork in the books can be described as transient because loose parts used within the scenes are not fixed and can be picked up and used again and again in different ways. In order to create transient art, the participant has to engage in play and experimentation with the materials at hand.  With transient art as the primary illustration method, the idea of play becomes central to the whole creative process. Play is also a key theme within the storylines of Junk DNA and the Visitors. 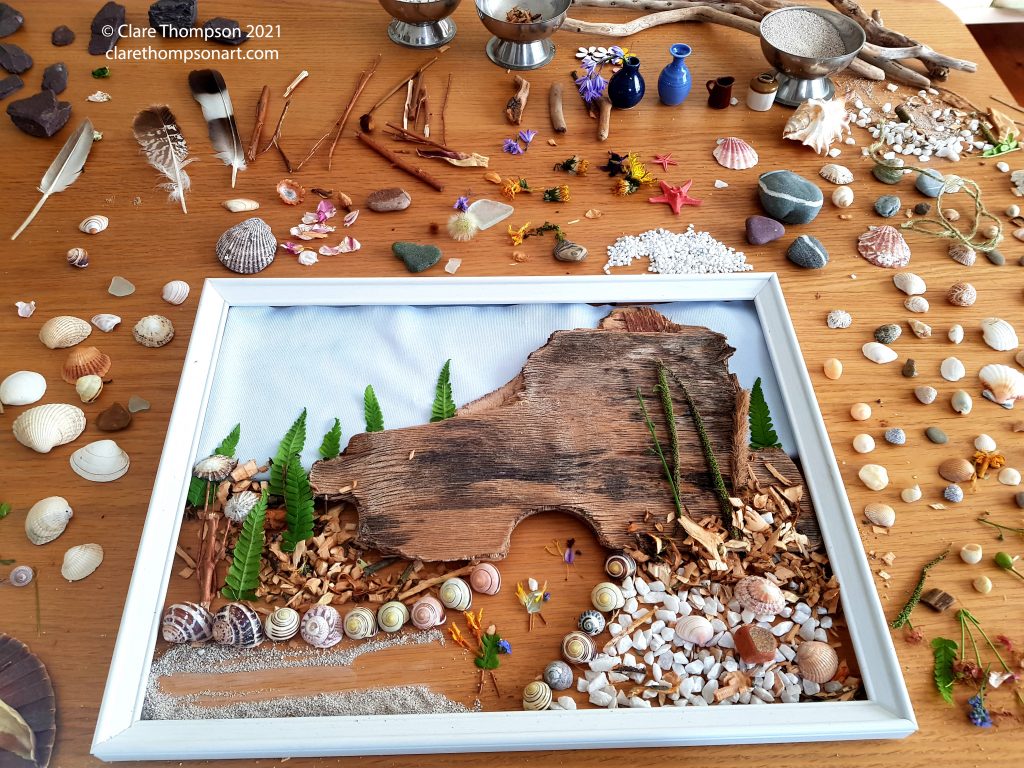 In the same way that humorous, play-themed books such as Jan and Jerry Oke’s Naughty Bus or Mini Grey’s Traction Man can be used to invite creative response through imaginative play, the depiction of real objects used representationally within my illustrations has inspired tinkering and loose parts storytelling sessions. Below are some examples of children’s transient artwork using metal loose parts in response to Junk DNA. 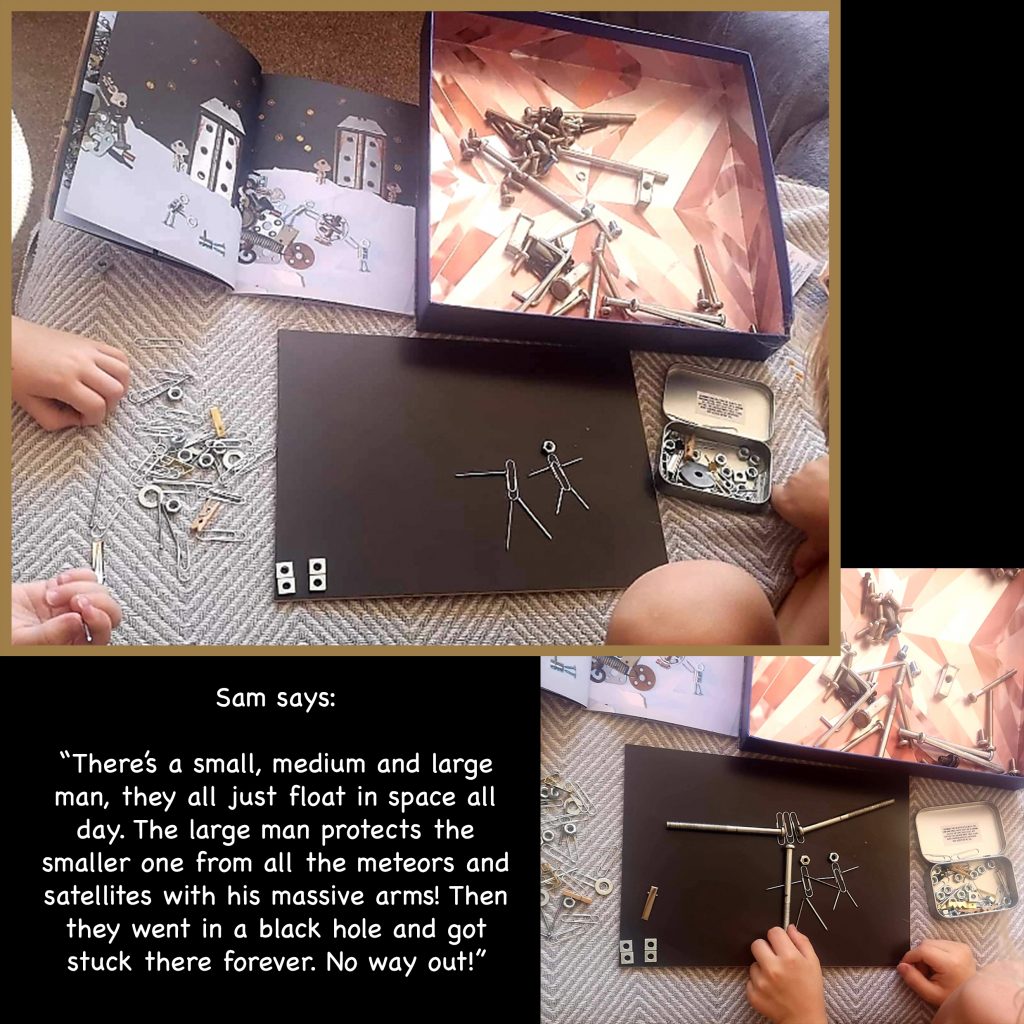 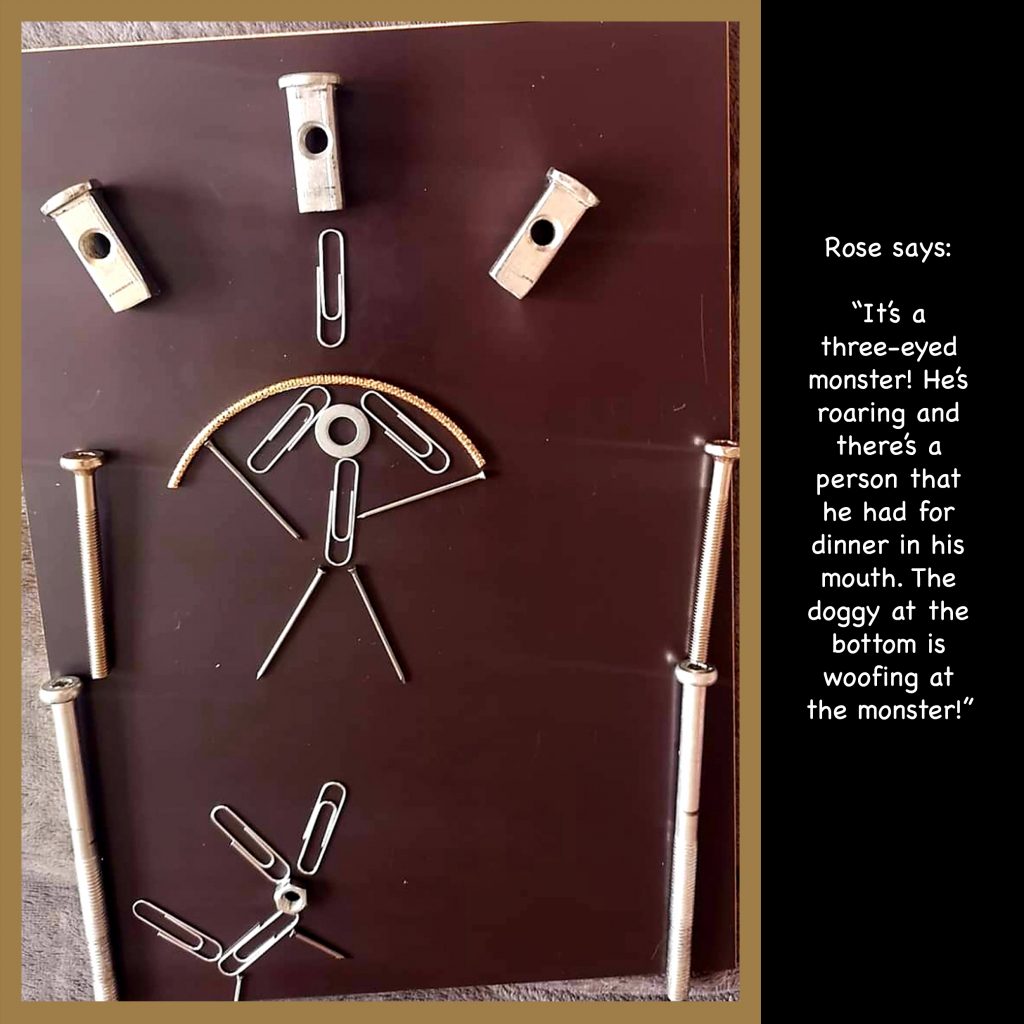 The focus on imagery alone in wordless picturebooks means that they can be a great resource for building and maintaining visual literacy. They offer an open-ended invitation to “read pictures” and therefore many visual cues for potential learning, contemplation or discussion can be included within the illustrations without making it obligatory that they are all responded to. 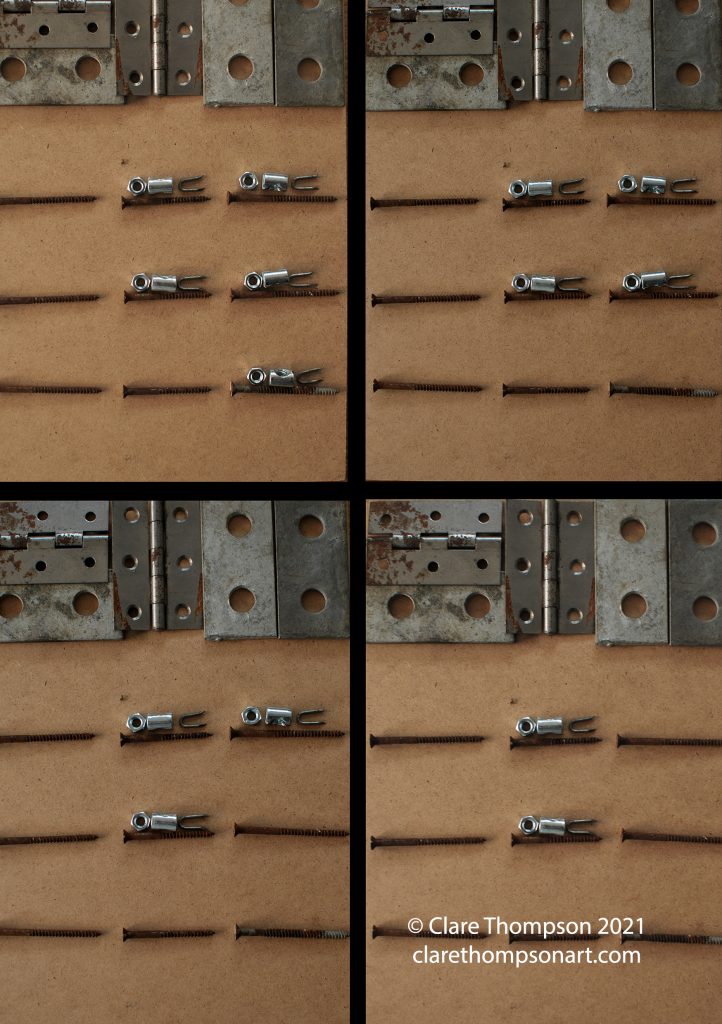 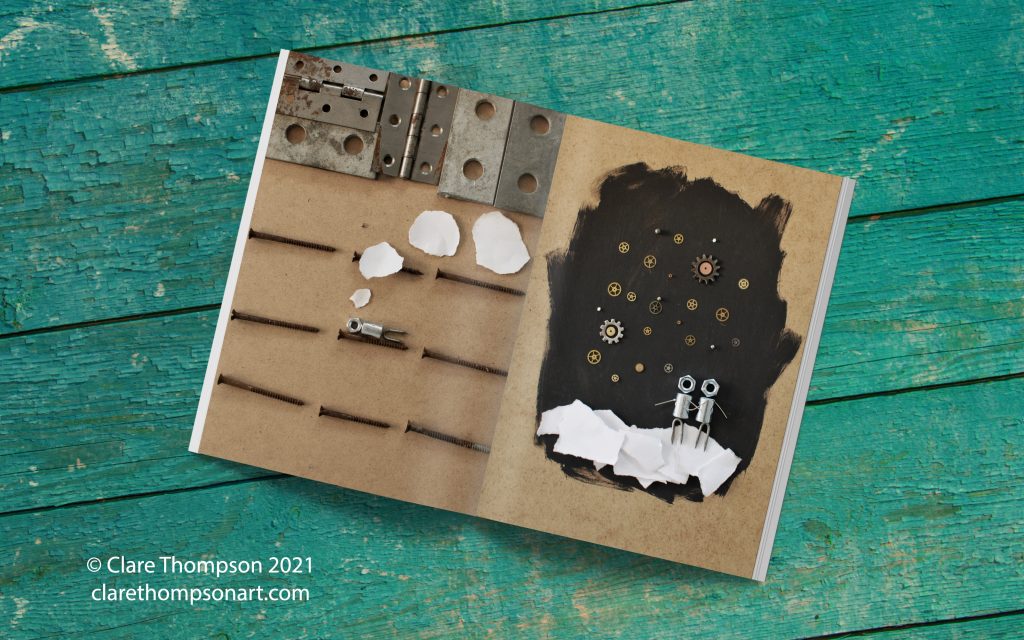 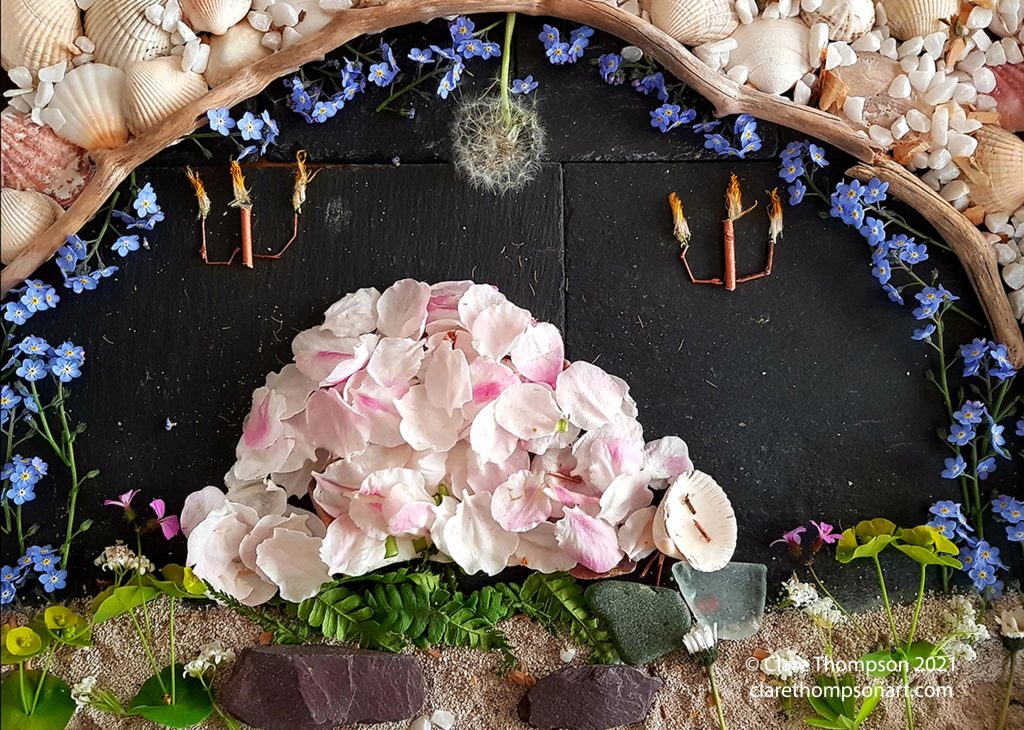 The third story I created using loose parts was titled The Gingerbread Man- A Transient Tale. I wanted to play with the idea that the reader may already have prior knowledge of the story and so the only pieces of text within the book are familiar repeated refrains and dialogue between the characters. 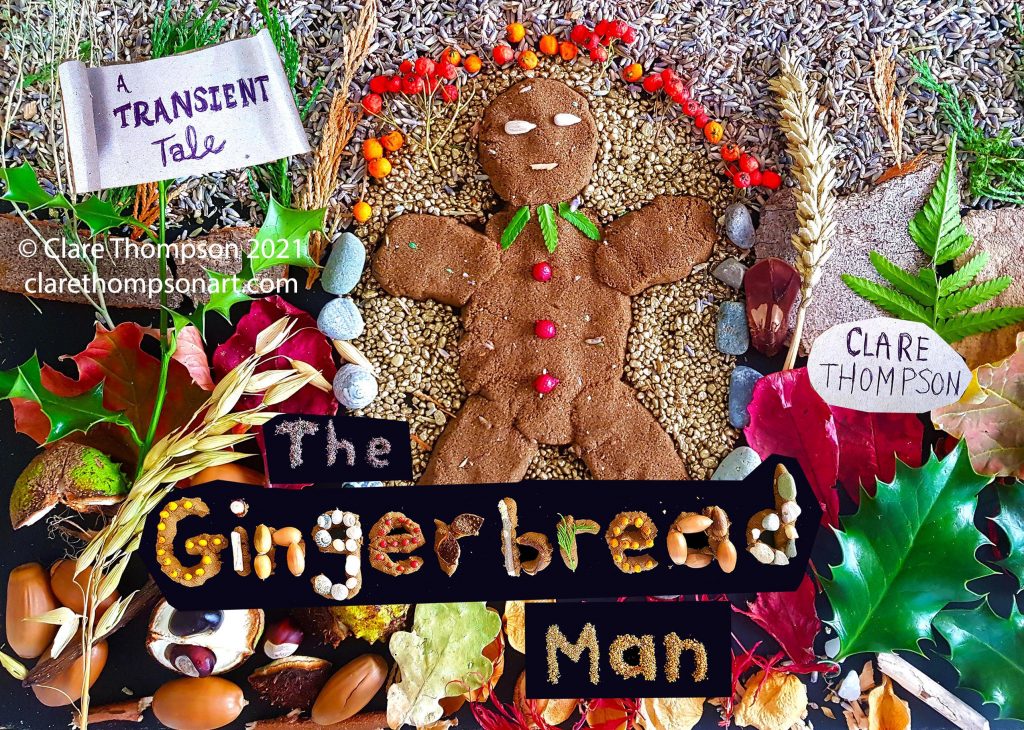 The book is not intended as a replacement for oral or written retellings of the story but rather to complement them. The assumption of prior knowledge meant that I could intersperse snippets of dialogue, refrains and sounds from the story with the aim of adding another layer of information to the illustrations whilst hopefully preserving the reader’s freedom to interpret and create their own narratives. 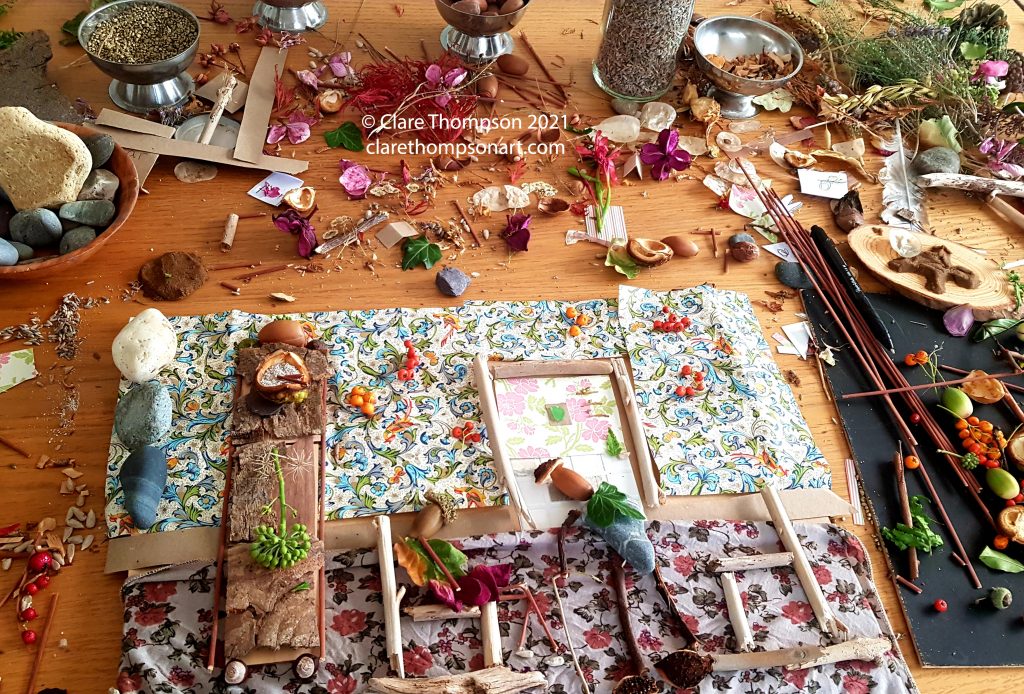 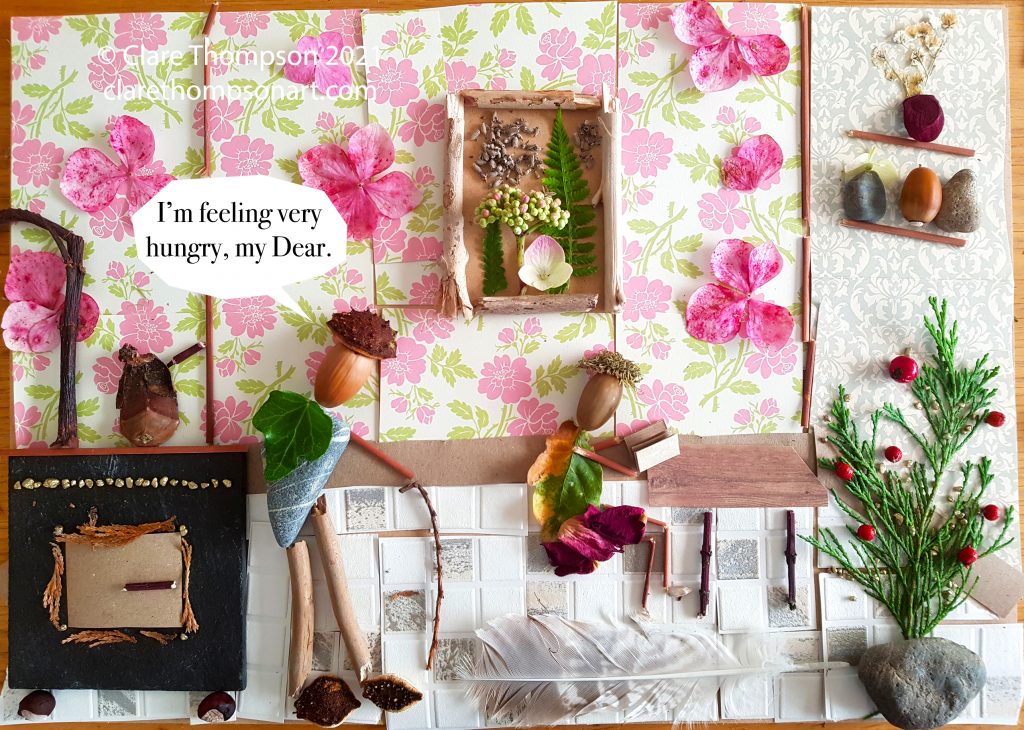 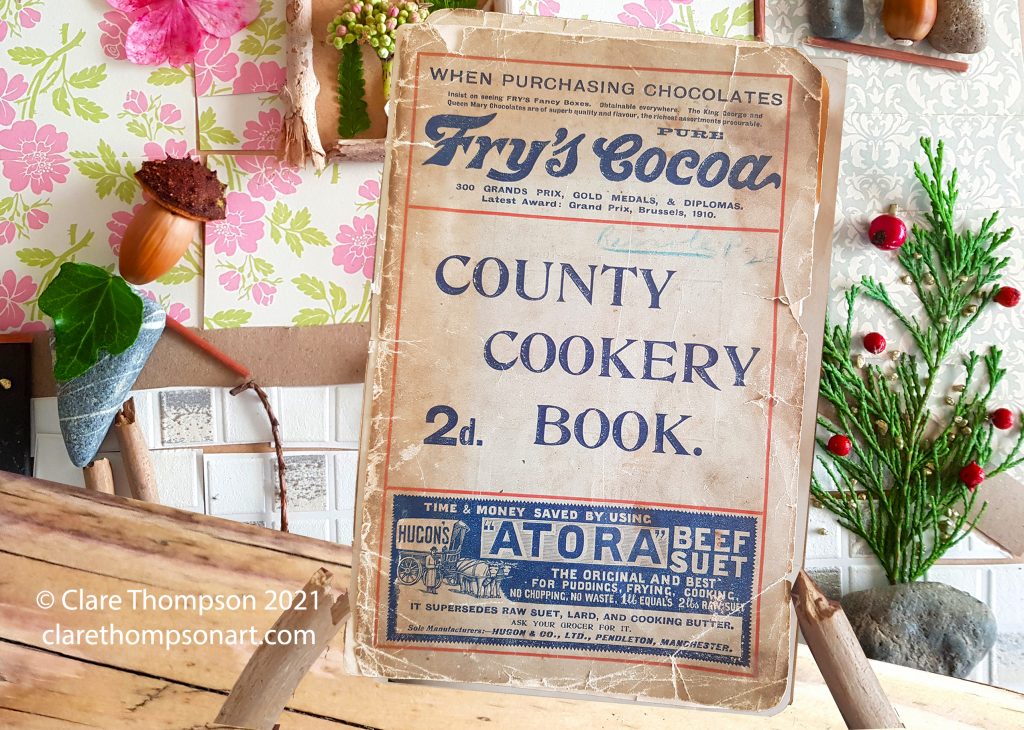 Rather than being a separate communication mode from the illustrations, text can be used as another loose parts variable to be incorporated into the creative process. In the same way that the shape of a stick, stone or curious object can inform the direction of a storyline during play, so too can text. For example, when creating the first scenes of the story I was playing with paper and found objects and came across an old cookery book I had picked up in a charity shop years earlier. It seemed to fit perfectly with the feel of the illustrations and by a pure stroke of luck it even had a recipe for gingerbread in it! With a little editing I could share a joke with those already familiar with the story of The Gingerbread Man. 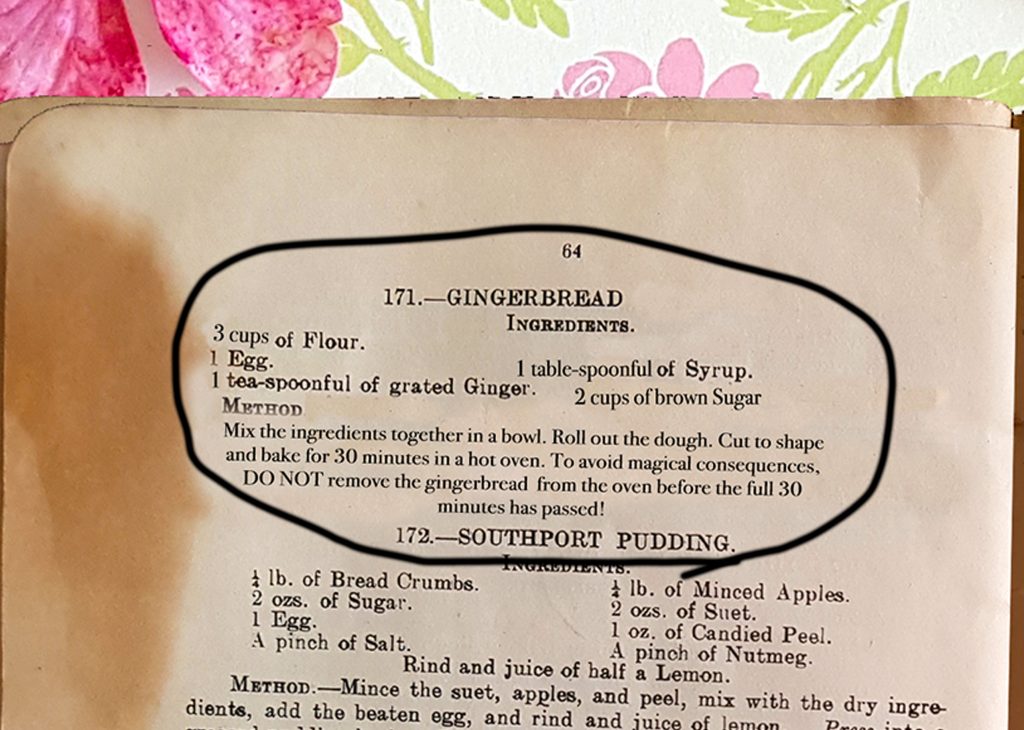 The date on the cover of the cookery book read 1910. It then seemed fitting to create the illustrations to be in keeping with this time period, this gave me the idea for the rocking chairs and grandfather clock in the next scenes. It then made sense to show the clock hands in two different positions to indicate that a certain amount of time had passed (not enough!). My hope is that including text and additional details in this way will open up lines of potential communication and enquiry rather than narrowing them down. The reader does not necessarily need to respond to all of the cues in order to tell the story and so complexity is added while access to the basic narrative remains inclusive. 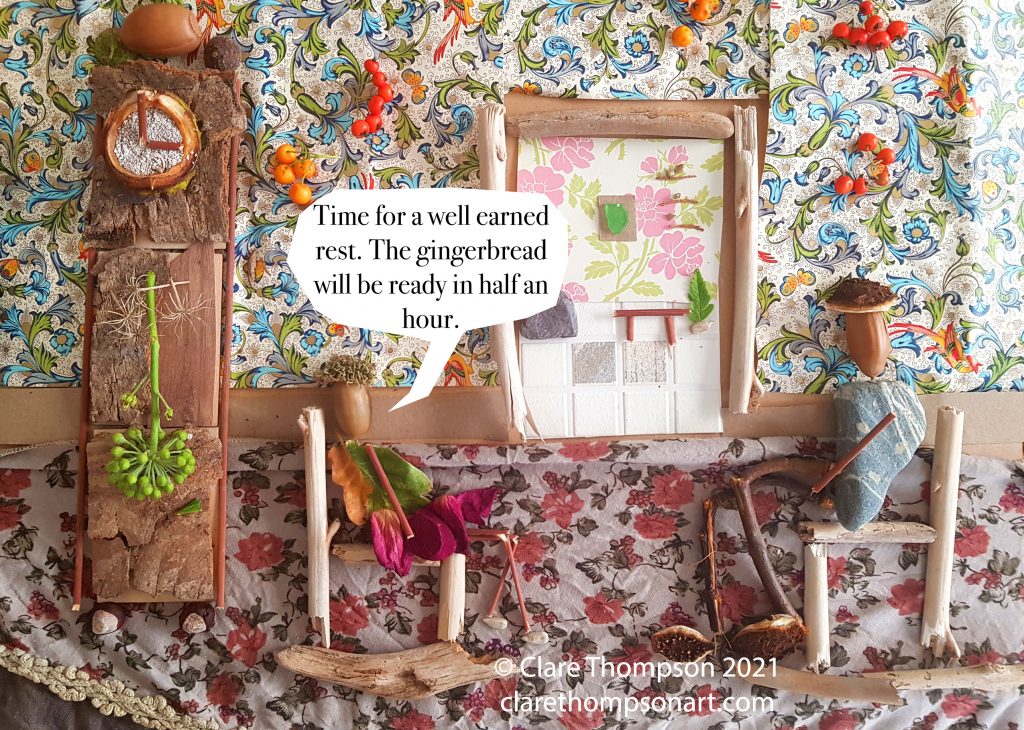 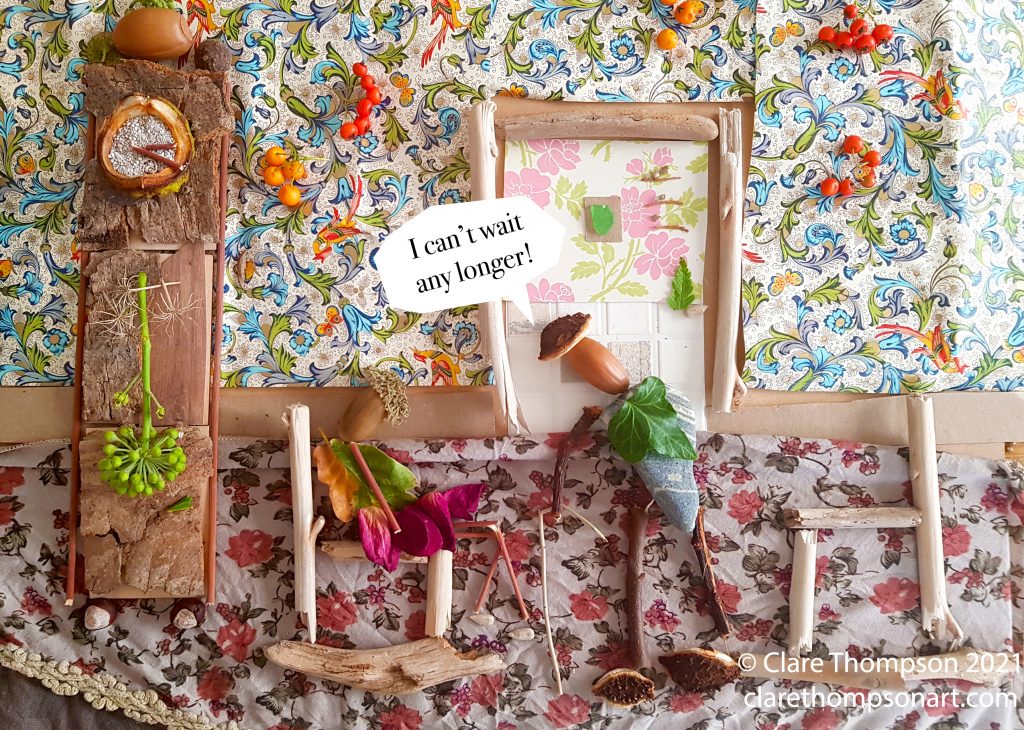 I have recently created a fourth transient tale, titled Rain Child. The storyline follows an enthusiastic child and an initially reluctant grown-up as they venture out into the watery landscape of a rainy day. 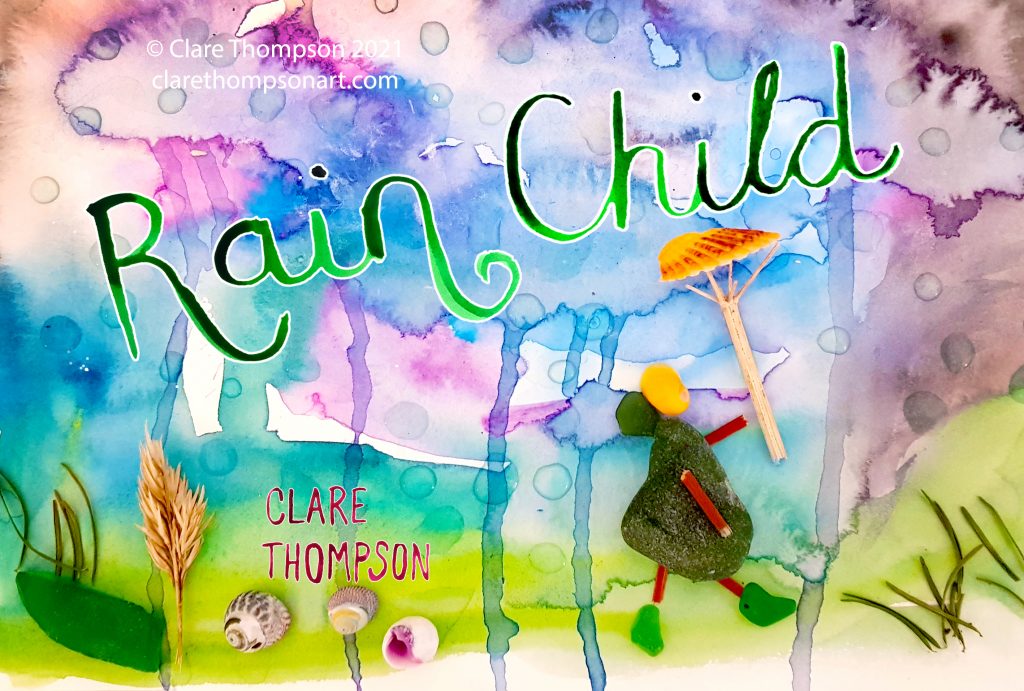 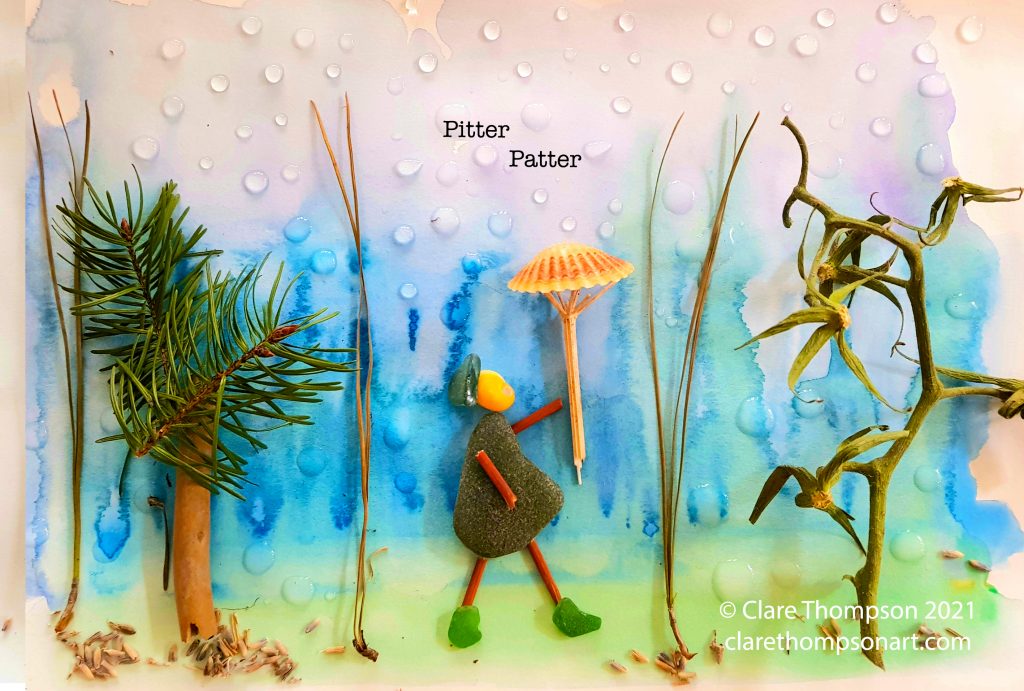 With the creation of this book, I wanted to build on the ideas from the previous three. Again, transient art is used as the primary illustration method and text is included in the form of environmental sounds, refrains and dialogue. There is also the addition of a second illustration method with the use of painted watercolour backgrounds. The backgrounds became another loose parts variable in that I didn’t know which images they would be used for when I painted them. When working with children in the past I would keep a draw full of “used” paper that had been painted by children in process art sessions because it could be reused in future play; whether mark making or transient storytelling, the pre-existing shapes and marks could spark ideas. For Rain Child I painted around 100 different possible backgrounds, covered the floor with them and then chose the ones that I thought would best fit each scene as I was working on it. Conversely, for some of the pages, the idea for the scene would come from looking at the colours and shapes in the watercolours. 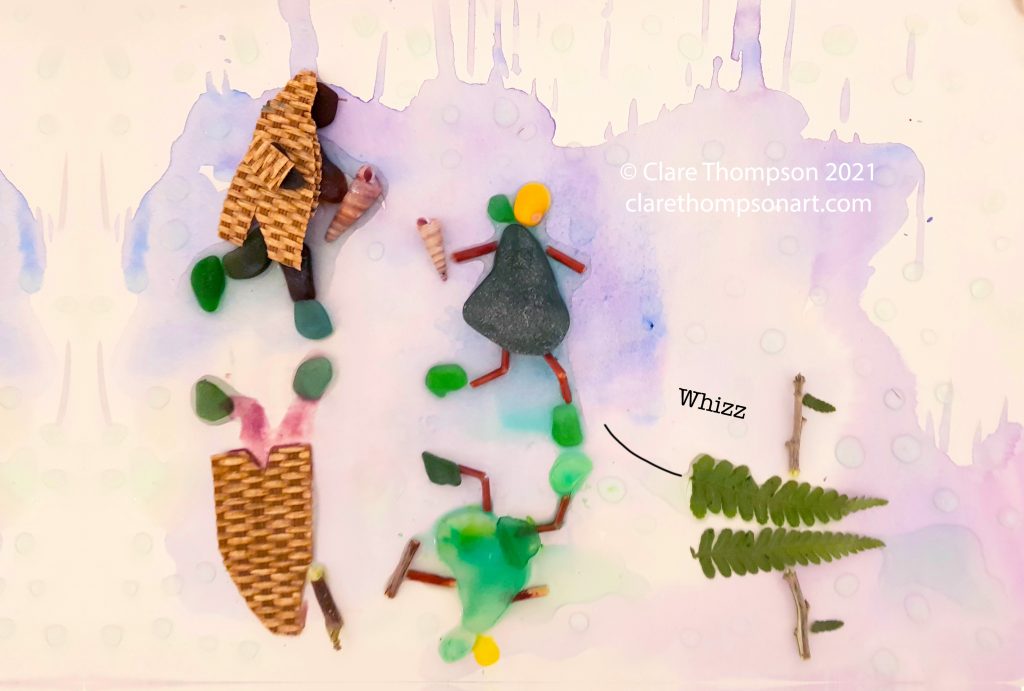 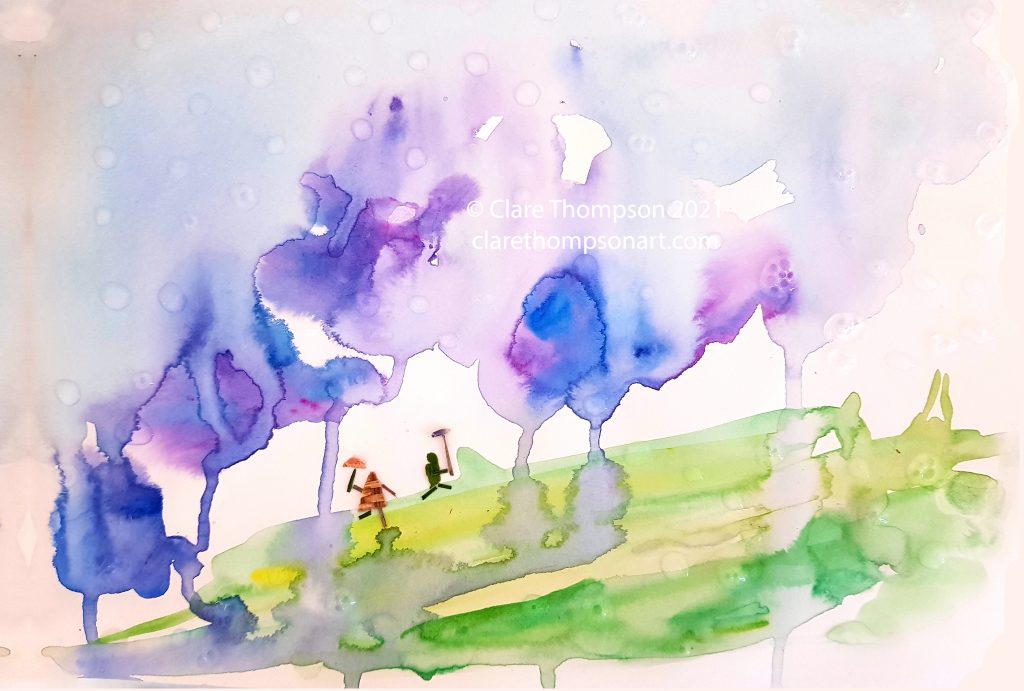 As mentioned previously, I like the idea that the themes within a story can be reflected in the methods of creation. It therefore made sense for water to be used as much as possible both to enhance the tactile nature of the illustrations and to provide inspiration for play. My aim again was to use a mix of media in order to invite engagement and creative response, this time with water as the focus. Once I had created the scenes on top of the watercolour backgrounds, I found that by experimenting with soap suds and also using a pipette to drip droplets of water onto scenes, I could create another visual layer that was in contrast with the solid loose parts. 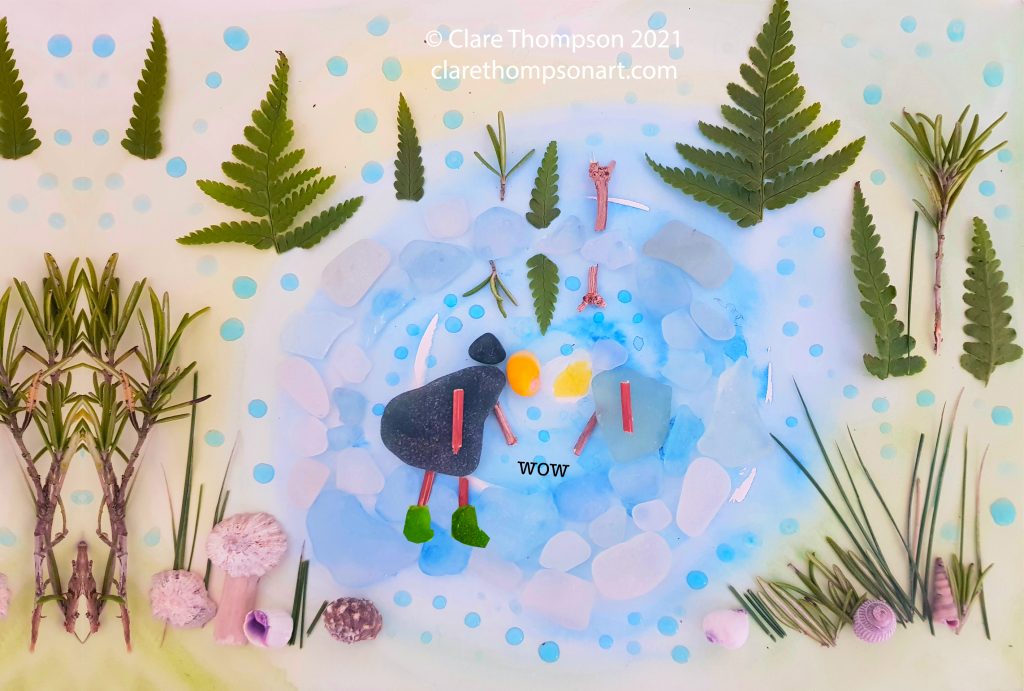 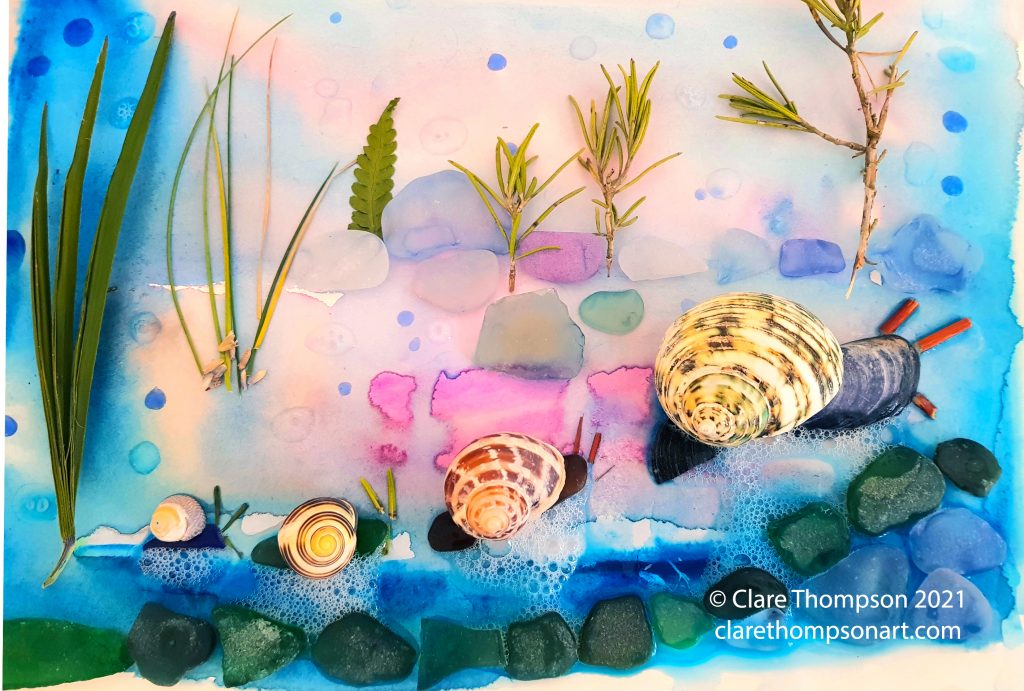 Below is an interpretation of the story told by Noah, aged 3. Having explored the book first with an adult, we can see how he takes the visual cues and runs independently with them, using the story to express his own experiences, knowledge and creative vocabulary. 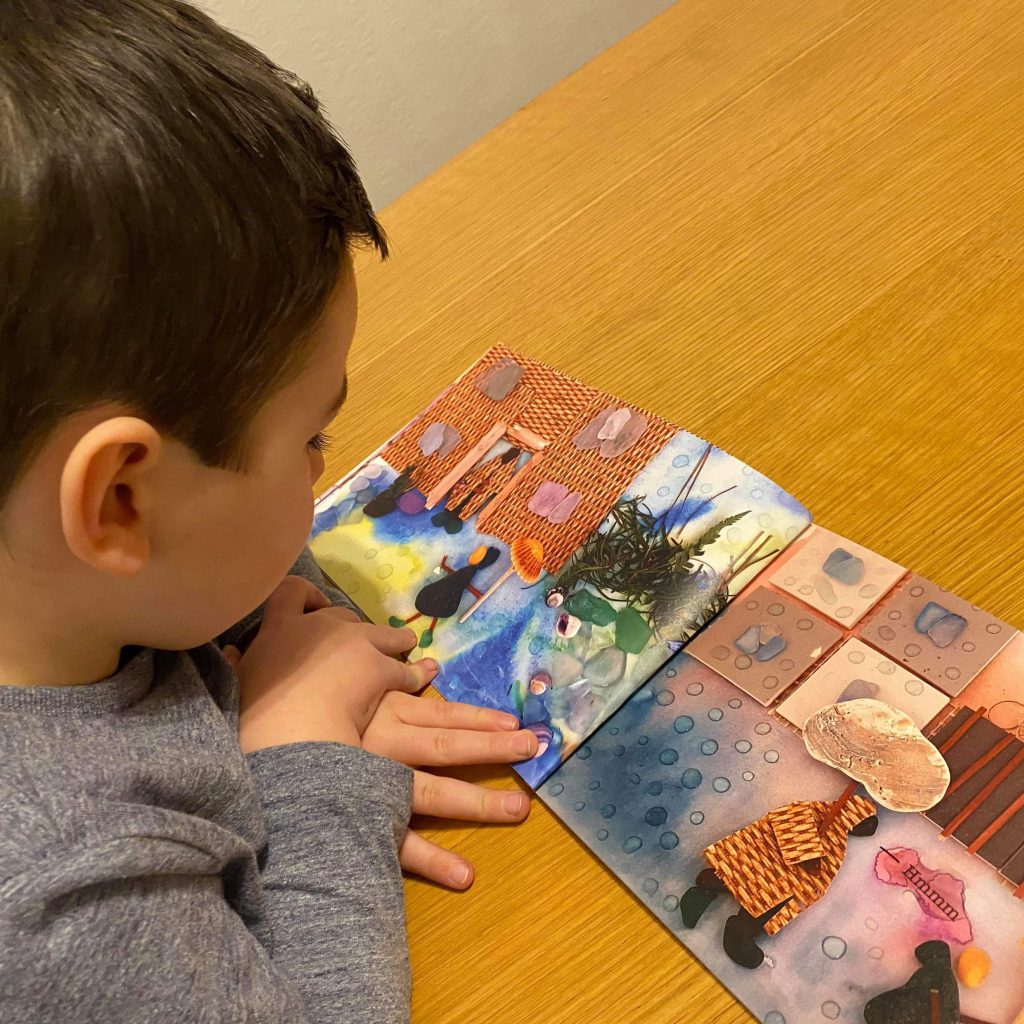 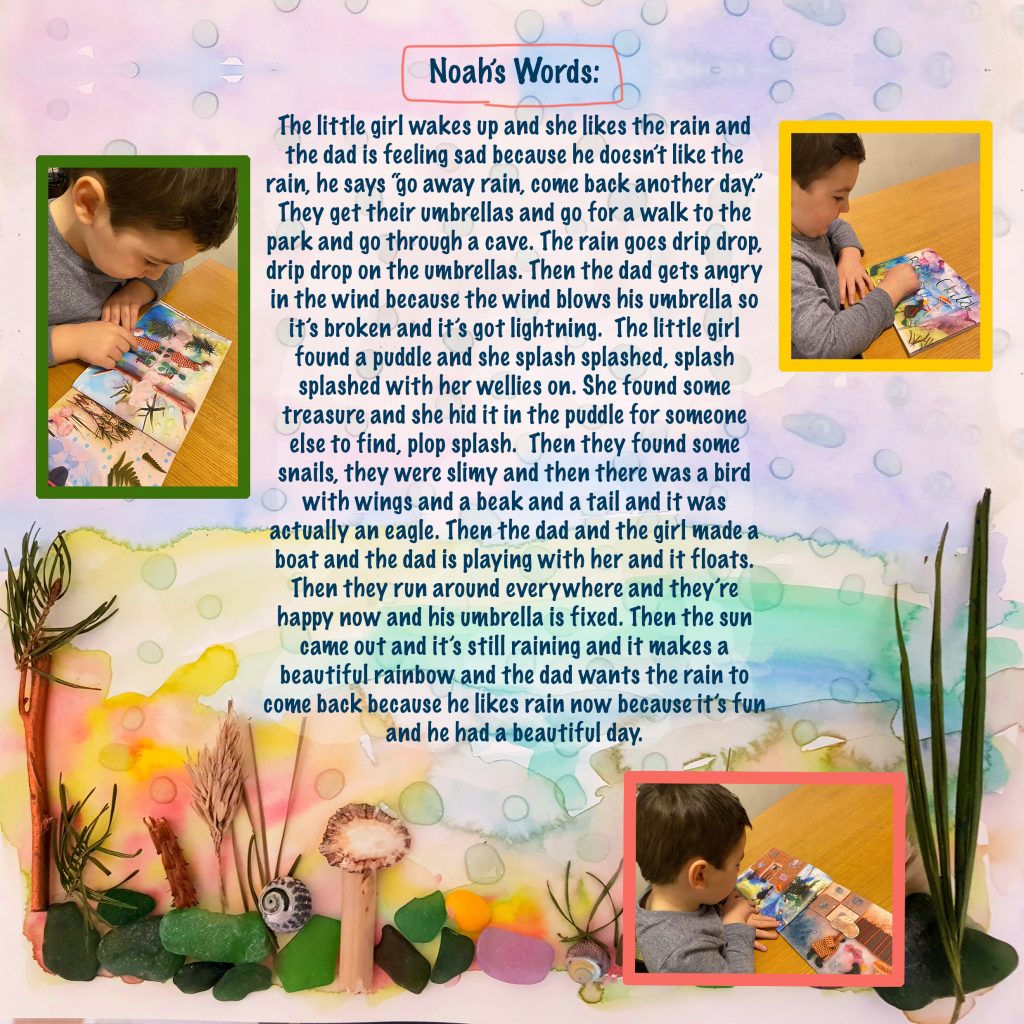 It is clear that wordless and minimal text picturebooks can be used to evoke many opportunities for learning and conversation. By creating them through loose parts play, I hope to highlight the appeal of creative experimentation with tactile materials and real objects and to demonstrate how environments rich in these, such as the natural world, are alive with possibilities.

Thank you Clare I Imagine you have inspired adults and children alike to get collecting, digging down the back of the sofa and getting creative with their loose parts!

6 Comments on “Wordless Stories, Transient Tales and Text as a Loose Part”