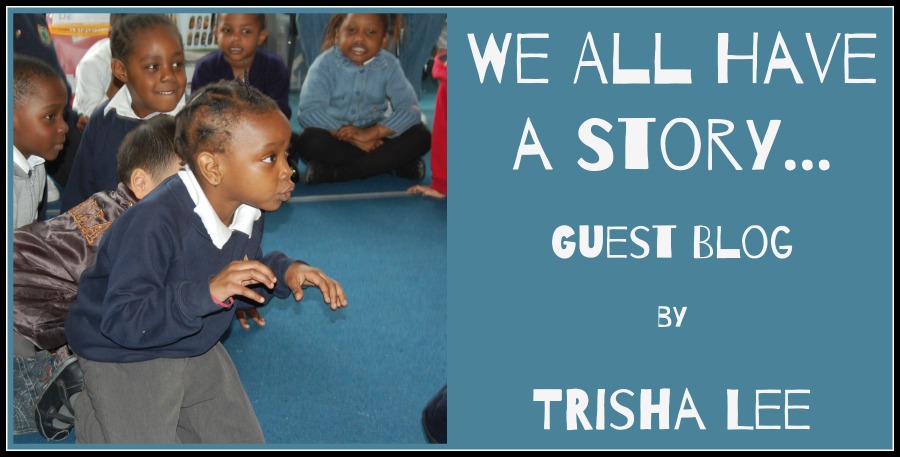 This weekend I have got a guest post from Trisha Lee who uses ‘helicopter stories’ to promote creativity and story telling. Over to you Trisha…

We All Have A Story

Helicopter Stories is in theory a simple approach, the practitioner sits with the child and scribes their story verbatim. Then the whole class gather to act these stories out. The complexity of this model lies in its child-centred foundations. Based on the work and ethos of Vivian Gussin Paley, Helicopter Stories creates a non-judgemental environment for children to share their narratives, a place where nothing they do is wrong. Used regularly, Storytelling and Story Acting quickly becomes an activity that all children want to engage with, regardless of their ability or additional needs.

I am often seen sitting on the floor of a classroom surrounded by Nursery, Reception or Year 1 children, eager to dictate their stories. It is my favourite place. It is where I learn the most about the children I work with, discovering the way that they see the world.

And the secret ingredient that can engage even the least engaged member of a classroom, is the fact that once a story is scribed, it is brought to life around a taped-out stage. 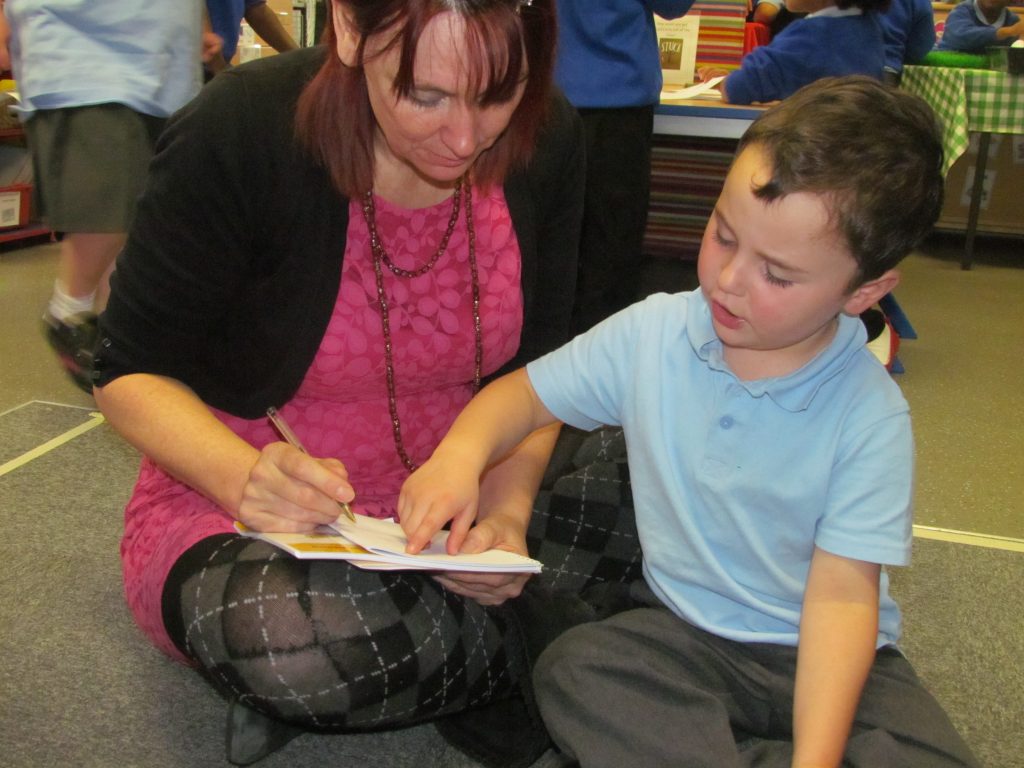 When children have the opportunity to act out their stories they begin to share in the imaginings of all their classroom, not just the few friends who they regularly play with. This is the beginning of a sense of community.

Children also benefit from knowing that their words are valued.

Once upon a time a bird was flying around its nest,

And then it see a tree what looked all shiny.

And the bird called his mum and told his mum he saw a shiny tree.

And his mum said to him, “There’s no such thing as a shiny tree.

And the bird said “yes there is.” And his mum came to look.

And his mum saw the shiny tree and she told him,

“Let’s pick all the leaves off.” And so they did.

Jade’s mum picked her up from nursery each day and I remember talking to her once, sharing with her the wonderful stories her daughter created. “Oh she’s a right chatterbox,” her mum replied. “She doesn’t know when to shut up.” The disdain on her face made me feel like I’d walked into a scene from Roald Dahl’s Matilda.

“She has an amazing imagination and an instinctive knowledge of how story works,” I persisted, feeling like Miss Honey, the kind teacher from the Trunchbull Prep. Her mum looked at me and shrugged. 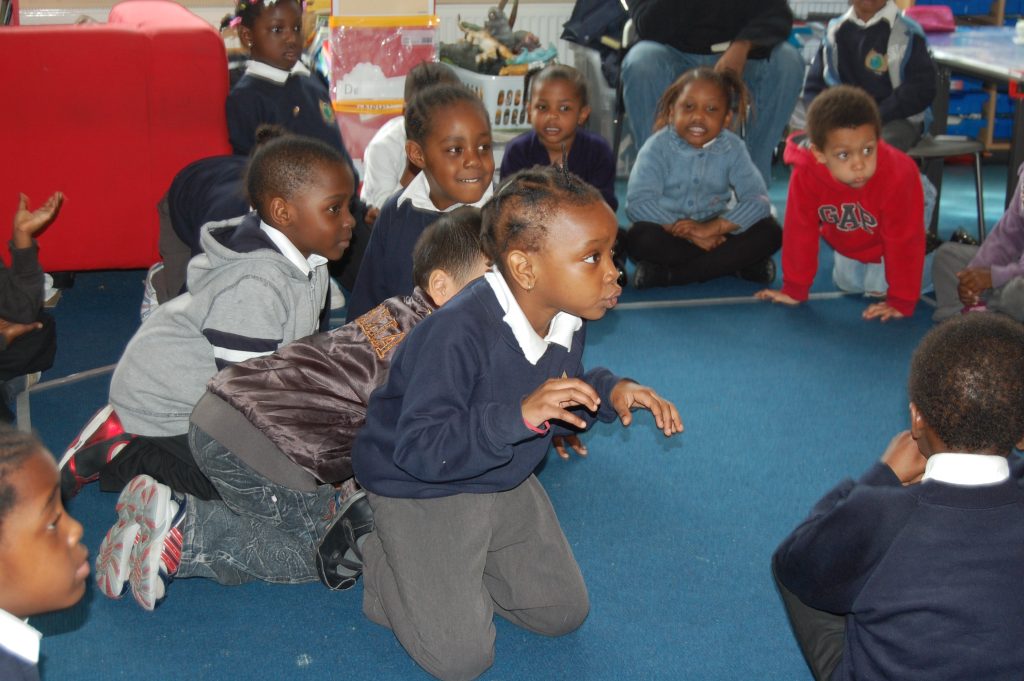 A few weeks later Jade told me her shiny tree story. It had a profound effect on me, and as I read it back to her I tried to work out why the story felt so sad. I asked Jade why the mum picked all the shiny leaves off, and she looked at me for a moment, before shrugging her shoulders as her mum had done and saying, “Because she did.”

The story haunted me for several days. A bird finds a shiny tree, the mum pretends it doesn’t exist, and then, when the mum finds it, she destroys the very thing about it that makes it special. As I unpicked the meaning of these words, I felt that this four-year-old had handed me an important metaphor, one that defined the fragility of the creative process. 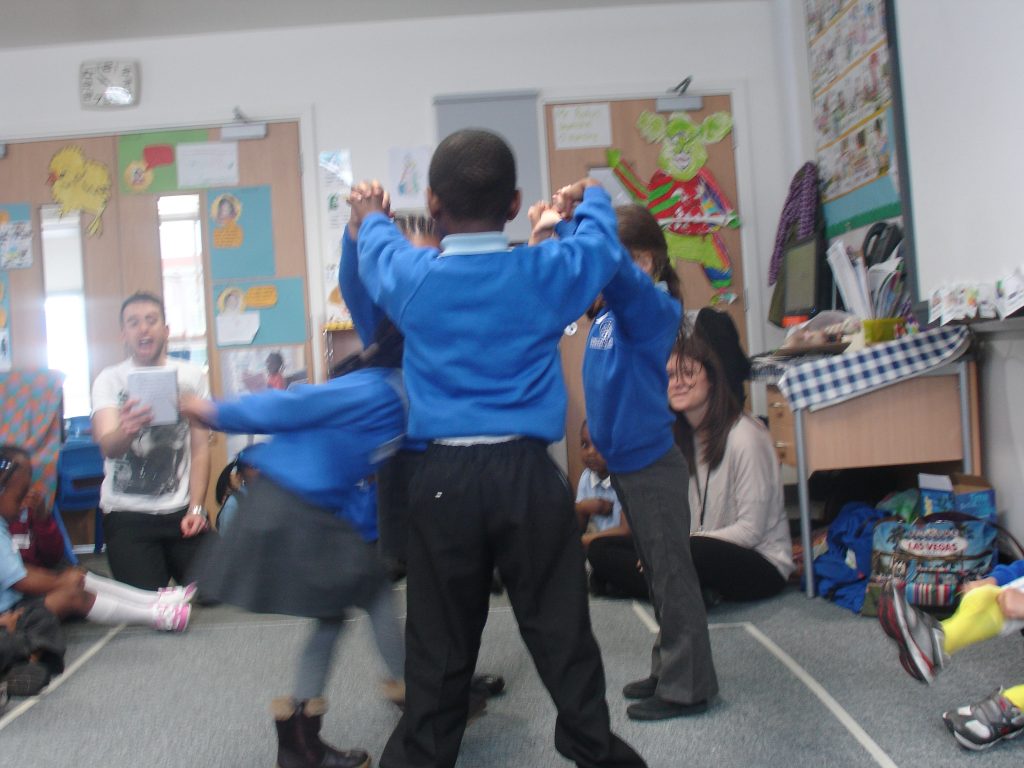 How often do children share with us their shiny trees? Whether it is the picture, lovingly painted, or the tower, painstakingly built, or the story, carefully crafted, our classrooms and our homes are filled with the shiny trees of the children and young people around us.

And how many of these children have the leaves from their shiny trees regularly picked off?

“That’s a lovely picture, why don’t you paint the blue sky going all the way down to the ground? How about if you placed some more bricks on this side of the tower? Why don’t you use bigger words or some adjectives to spice up your work?”

And the leaves from the shiny tree begin to be picked. What is interesting about Jade’s story, is that she invented it when she was taking part in an approach that supports the creativity and imaginative development of children, an approach that allows their shiny trees to flourish. 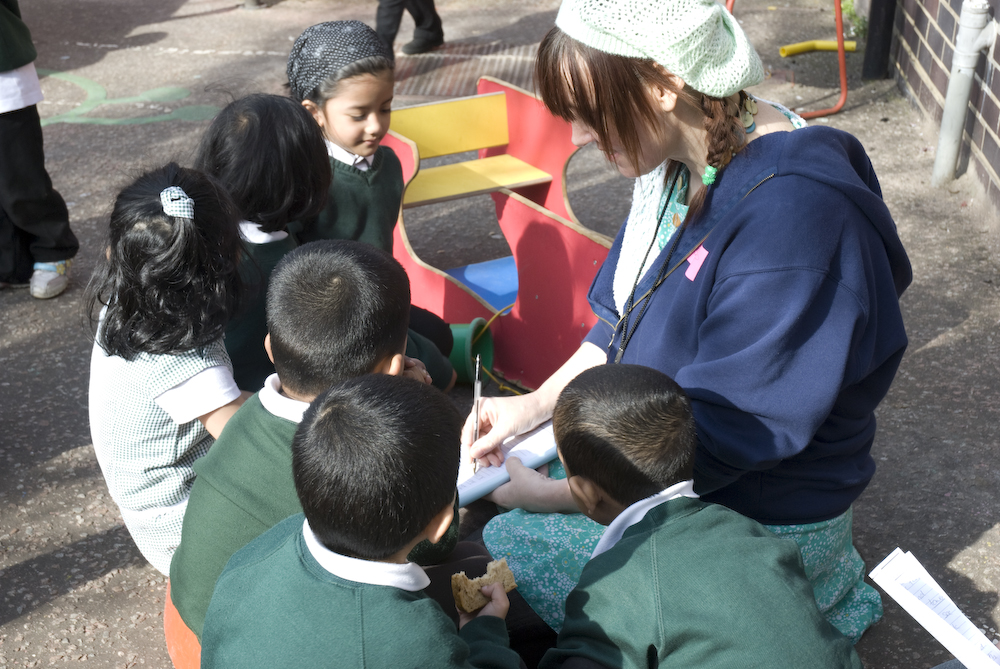 When we create an environment where all shiny trees are valued and all children have the chance to be heard the results are often surprising.

Mattie, a boy with autism I worked with, wanted to stay in a wigwam near the stage whilst the acting out took place. As the first story happened, he poked out his head. During the second story, his whole body came out, by the third story he had crawled behind one of the other children, and was peering around them. After three sessions in his classroom, he eagerly sat next to the stage as soon as the tape was laid down. Mattie ended up telling stories about dinosaurs and roaring, a lot of roaring. By allowing him time to come to the stage, I was privileged to hear that roar.

All children have a story inside them, and I love how Helicopter Stories allows me to take the time to listen to each child.

Malika, a girl in a setting in Westminster who struggled with speech and language, spent every session I worked in her classroom pulling me around the room and showing me different objects that she wanted to include in her story. As she introduced me to each object I said the name of it and wrote it down. “Dinosaur, Lion, Car…” She then began miming driving around the classroom in a pretend car, so I wrote that too. When we acted out her story she joined in with other children playing the dinosaur, playing the lion, before finally driving around the stage in her car. If I had any doubt that the words I had written down reflected what she was sharing with me these thoughts quickly vanished when I saw the connection she made with them through the acting. 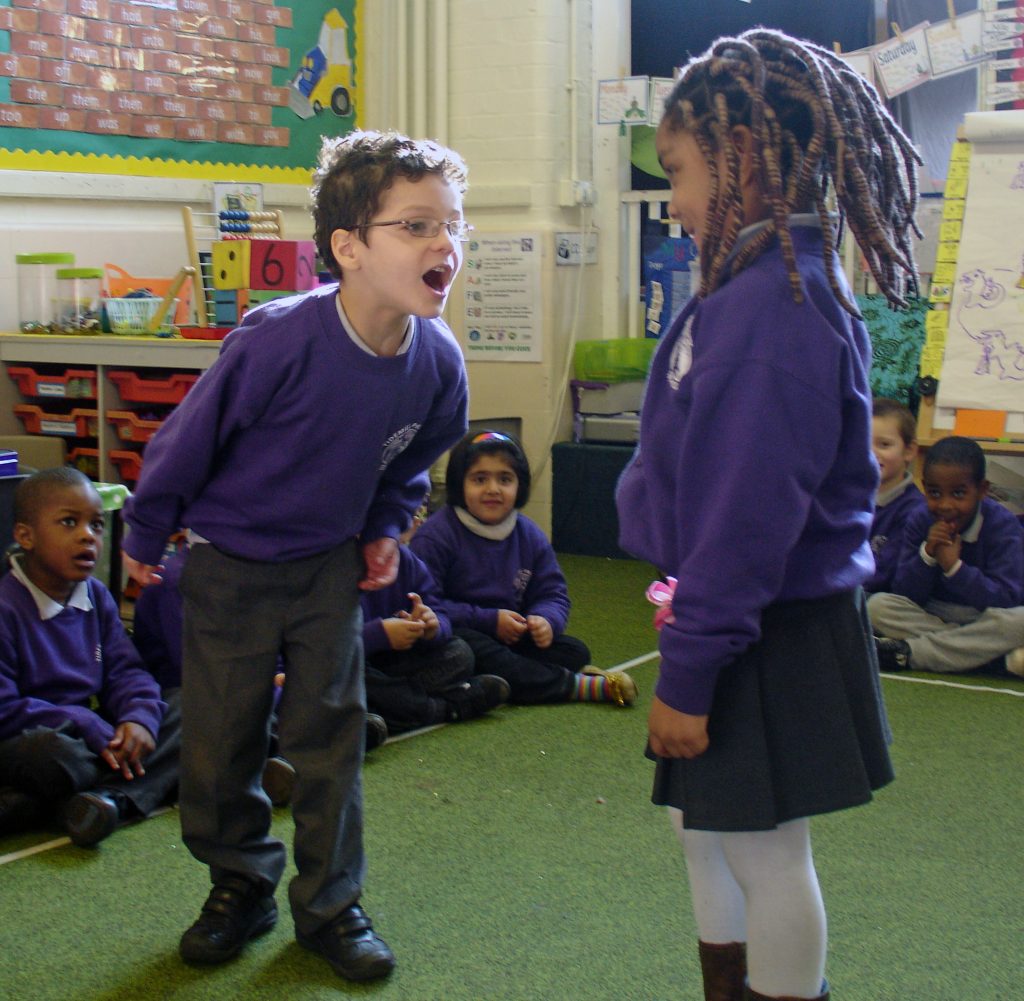 I have seen Helicopter Stories signed by children, whilst the practitioner carefully signs back the words she has heard and then writes them down. One reception aged girl who was a selective mute and had not spoken to an adult in her school since starting the previous year, whispered to me the word ‘Princess’. This followed weeks of her watching as I scribed stories from her peers and supported the whole class in acting them out.

The secret of all this is easy – no pressure is placed on any child. This is an activity where they cannot fail. 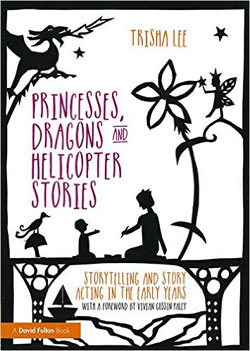 Or watch Trisha in action on http://youtu.be/UkJl8dyzRQQ

Thanks Trish for that really interesting blog.

Have a lovely weekend all,