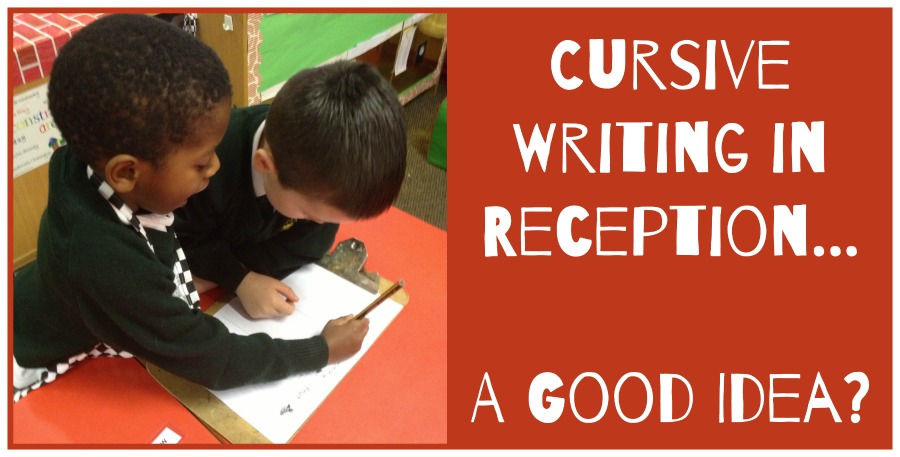 I am regularly get emails from Reception practitioners saying that they have been told they have to teach cursive writing to their children, even though it is against their better judgement. They usually ask two questions.

1) Would I recommend it?

Or, ask the person who has told you you have to do it. They must have a plan!

I appreciate none of the above are actually very helpful, but fundamentally I don’t think that it is developmentally appropriate for Reception children to be cursive writing.

Most (not all ) of the teachers that I have worked with who do cursive writing with Reception tell me they don’t think it is appropriate either and that it actually slows down writing progress and kills enjoyment. It also seems to somehow increase adults alcohol consumption!

But, as I know lots of the readers of this blog teach cursive writing in Reception I thought you could share your thoughts on it with each other via the comments at the bottom of the post. After all, you are people who are actually doing it every day.

I have included a couple of articles in this blog post that may be of interest. The first is a link to a 2017 document from Early Education which is a really useful read. You will find that here . The second is a piece of writing by Pam Hulme from The National Handwriting Association . You can download a pdf here.  Although some of the assessment language has changed slightly since it was written, the content is still very relevant. The third is a 2016 blog post by Ruth Miskin You can find the whole blog here. I write as a teacher with more than forty years of experience in primary classrooms, subject leadership and management. Many of those years have been with the youngest children in school, including Nursery. I have been involved in Literacy education at local, national and international levels and have a particular passion for the teaching of handwriting. This includes providing training for schools on behalf of the NHA and as an independent consultant. I also support some individual children with handwriting problems within a London primary school. The impetus for this article is my concerns with the practice adopted in some schools of introducing the teaching of ‘fully cursive’ handwriting with ‘lead in’ or ‘entry’ strokes from the beginning of the Reception year (ages 4 -5 years).

In England, the curriculum begins with the Early Years Foundation Stage (EYFS) 0-5 years,followed by the National Curriculum which is divided into Key Stages 1-4. The National Curriculum for English (2014) places high importance on teaching handwriting and confirms the importance of achieving automaticity, so that the child’s higher processes of thinking can be released to work on compositional skills, rather than be consumed by the motor, sensory and perception demands of transcription.

Good early practice in handwriting teaching seeks to establish secure foundations from the beginning then to practise, refine and extend skills. Continuity and consistency are essential factors in helping children retain movement patterns. Those advocating the early teaching of fully cursive with ‘lead in’ or ‘entry’ strokes (see Fig.1 below), wish to establish this practice from school entry (Reception) so that children do not have to alter movement patterns at a later stage.

Whilst this model sounds plausible and is successful with some children, my concern is that it is unsupported pedagogically, is unnecessary and creates failure in some of the youngest and most vulnerable children. I will proceed to outline my reasons:

Some children will be already reading and writing letters when they start Reception, including those attending Nursery classes in the same school. The letters they use, and those in the wider print environment, are not likely to have entry strokes. What are the implications for continuity and consistency?

There are no requirements to teach fully cursive writing either in the EYFS or in the National Curriculum. Indeed, the National Curriculum for English places emphasis on the acquisition of letter shape, space and size before joins are taught and delivers clear messages that some letters are best left un-joined.

For Year 2 pupils (6-7 years), the requirements include the following: The National Curriculum reflects the position that there is no evidence supporting the notion that schemes which use ‘lead in’ strokes and fully cursive writing, are in any way superior to those in which letters start at the top and join with an exit stroke. Although ‘lead in strokes’ are taught widely in other European countries, there is an important age difference for when formal writing is introduced, i.e. at around 7 years of age, as opposed to 4-5 years in England.

Fig.1. Example of cursive letterforms with entry and exit strokes.

Handwriting is a complex perceptual–motor skill that is dependent upon the maturation and integration of a number of cognitive, perceptual and motor skills (see Fig.2 below). Achievement demands the orchestration of multiple skills involving the eyes, arms, hands, memory, posture and body control as well as managing pencil, paper and following instructions. This is no easy task for very young, especially those ‘summer born’ children who are still only four years of age for most of their Reception year. At the end of that year, the Early Learning Goals set demanding benchmarks of attainment. Assessment of handwriting is to be found in Goals 4 and 10, which include these requirements: There is, quite simply, enough to do without adding extra requirements. The importance of the Foundation stage is in the name! Foundation skills in handwriting should be focused on all of the areas outlined in Fig.1. Practitioners need to be fully aware that the premature rush to get children ‘joining their writing’ when prerequisite skills are immature, may leave a legacy of handwriting problems that will be difficult to reverse at a later stage.

The development of the right oblique stroke necessary for entry strokes is emerging between the ages of 4 -5. Children with delayed development are likely to struggle to achieve this movement and experience frustration. For many children in our schools and their teachers, the writing demands of EYFS pose a huge challenge. The letterforms used need to be as simple and fail-proof as possible, with letters taught in ‘formation families which reflect the motor patterns required to write them. Moreover, these letters are similar to those found in texts, unlike those with entry strokes which can look quite different. Joining, whenever it is seen to be desirable, can be taught quite simply using the exit strokes of these letter forms.

The requirement to join at 4-5 years places a heavy burden on children who may already be struggling to establish basic handwriting skills, especially some of the ‘summer born’ and those with developmental coordination difficulties. Such children may want to be doing the same as their peers and will create their own joined script. Below is one example of writing by a child with such problems at the end of Year 1. He has received considerable support and encouragement in both years, but the demands of joining before he was developmentally ready has left a legacy of confusion. Fig 6. Example of writing by a child at the end of Year 1 showing confusions with joining

Handwriting teaching in many English schools is a subject of concern. There is a widespread lack of professional development in this field. Newly qualified teachers often start with little or no knowledge of the subject and there is inadequate understanding of the skills that underpin sustained development. There are frustrating contradictions between the expectations in the EYFS and the National Curriculum documents coupled with pressure on schools to achieve ambitious early outcomes. Recent government advice on how to teach handwriting has been scarce. There was excellent advice in ‘Developing Early Writing’, Section 3 (DfES, 2001) but in most schools this publication has been buried in the tsunami of other initiatives. Also widely unknown is the helpful circular, Developing handwriting (2009). The EYFS publication ‘Mark Making Matters’ 2008, contained helpful  advice, but omitted specific guidance about teaching letterforms.

In this climate, it is all too easy for practitioners to ‘fast forward’ to what appears to be accelerated progress and ignore signs of un-readiness. The focus of the Reception year should be to foster and strengthen the areas of development which provide the basis for long-term success in handwriting and to identify those children who need extra provision to strengthen their skills. There is a pressing need for teachers to ‘hurry slowly’ when growing young writers!

This is an excerpt from Ruth Miskin’s blog last year talking about why we shouldn’t teach cursive writing in Reception.

Why should we not teach children a formal cursive from the very beginning?

1. Children learning formal cursive might believe that being a good writer is synonymous with joining letters successfully.

2. Formal cursive takes longer to learn than printing: time that should be spent in learning to read and spell.

4.  Beginner writers often need to stop to think about each letter-sound correspondence as they write. Children learning formal cursive, however, might think they are expected to write the word in one continuous flow.

5. Children find it hard to read what they have written. Words are buried in a spider web of strokes. Many children add the joins once they have written the word making their writing even more illegible.

6. Joining letters is a separate skill, quite apart from learning how to form letters well. It can be delayed until later, leaving younger children free to concentrate on composition, spelling and correct letter formation. Some children, however, may well discover joins for themselves, if teaching has focused on correct formation and orientation from the beginning. For example, joining an ‘i’ to an ‘n’ with a diagonal join (as in ‘in’) or an ‘o’ to an ‘n’ with a horizontal join (as in ‘on’) are simple, natural joins that children might well use as a matter of course as they learn to write these common words. This should not be discouraged.

This quotation, below, by Hugo Kerr (author of ‘The Cognitive Psychology of Literacy Teaching’) makes the above points very well.

“All the [children] I see are at basic level and all religiously join up their letters, at great cost in my view. The cognitive effort involved in joining up is obviously large and also obviously reduces capacity to think…adding a large and difficult cognitive task, like cursive writing, to an already rather difficult task in a highly competitive environment is a costly affair, especially for the weaker students.

“It seems to me very clear that [children’s] writing behaviours show them struggling very considerably with joining up their letters per se. A great deal of their sometimes limited capacity for concentration seems to be directed at that fiddly, effortful and (to me) rather unnatural motor aspect of spelling… Bear in mind these are the weaker readers, so they are wide open to demotivation, not to say humiliation, faced with these complicated squiggles, so ridiculous when considered in detail.

“It seems to me self-evident that if cognitive capacity is so ferociously engaged in one domain, there will be correspondingly less of it available for the other domains we are actually interested in. This seems to me to be indisputable.

“If any of this is true, then it may be that we are fetishising joined up writing, or at least perhaps insisting upon it way too early? I find ‘joining up’ cumbersome and threatening (it looks a mess when I’m done; it feels clumsy and I feel stupid).

“What evidence is there that teaching joined-up writing early is necessary or useful? Would we know what it was aimed at?”

So, I would be very interested in your views. If you have any links to other articles that everyone might find useful, then stick them in the comment box.

34 Comments on “Cursive Writing in Reception – A Good Idea?”