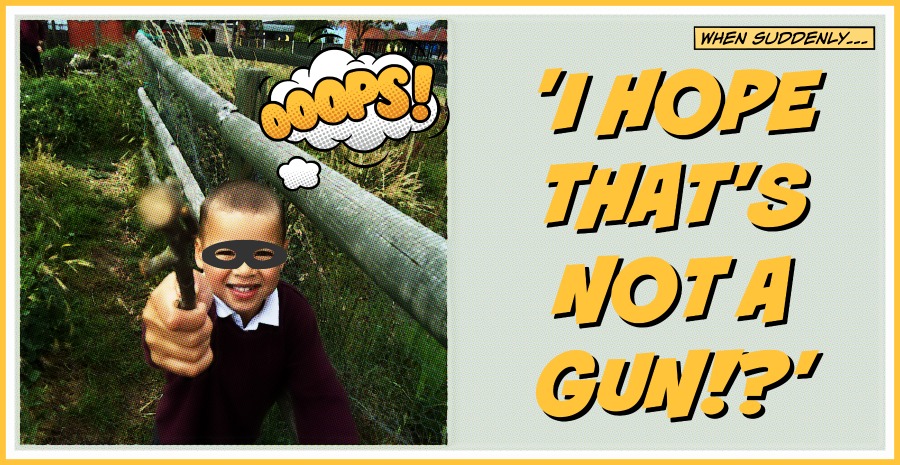 When I first trained to teach in Early Years, gun play was definitely off limits. We were told that there should be a zero tolerance to it as it encouraged children to be rough and aggressive. Any sign of a child wielding any thing that might have even been slightly mistaken for a gun had to be dealt with quickly and sternly.

I remember being left worth the feeling that if I ignored this behavior then I would be turning all of my gun making children into thugs in later life.

It occurred to me after a few years that no matter what sort of cohort the children were, no matter which school I was teaching in, superhero and weapon play was a big part of significant number of children’s play of choice. 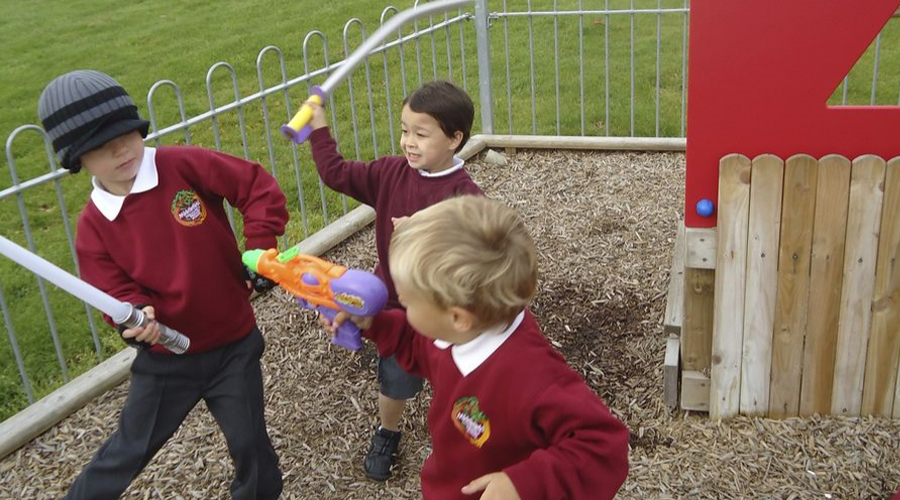 I seemed to spend an inordinate of time saying’ I hope that is not a gun’ about something that clearly was. The only positive to that was it encouraged children to think quickly and be creative in their responses like ‘No, erm, it’s a, erm, it’s a hose! I am watering the plants!’ An admittedly unusual action in a game of chase!

Not only was I seeing how much enjoyment children got out of it but also how much potential teaching and learning I was missing from their high level engagement. It also seemed like such a natural and fundamental play response for so many children that I figured there had to be more to it.

So, around the time that I became a Head teacher and needed to have a definite policy on how this sort of play would be judged in our school, I began to look into it in more depth. 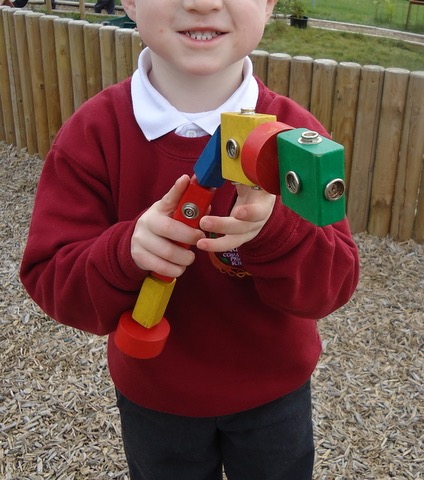 Through what I found out and the subsequent practice and impact that I have observed since, I have completely changed my view. Now I wouldn’t have a setting without a good dollop of Super Hero and Weapon play in it. But, and there always is a but, practitioners need to understand why children naturally play that way and how they can support and expend that play without instigating World War 3!

One of the reasons that children play in that way is that it gives them an opportunity to explore their interpretations of what they see going on in the world around them. By that I don’t just mean in the playground and at home but also in the media. How many ‘children’s ‘ films, even Disney, contain large sections of physical combat and power struggles? Increasingly when I am engaged in talk sessions with groups of children they will tell me about films they have watched with older siblings or parents, computer games that they have played or news reports that they have watched, all of which contain graphic images and often quite extreme violence. Even if they haven’t actually seen it for themselves, lots of children will relive a ‘version’ of what took place in the retelling of the child that did. No matter how cautious and careful we are as parents, our children cannot escape the reality of the world around them – especially when their influences become not just their parents and carers but also their peers! 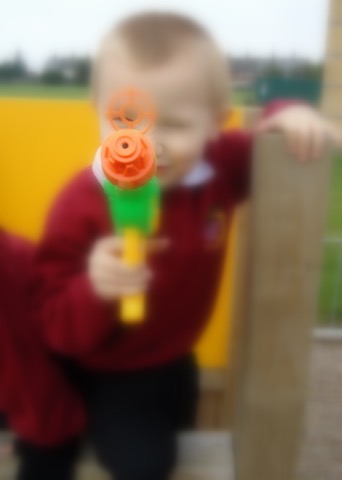 Role play allows them to explore all of these questions and emotions in a controlled environment and a safe context. They can explore what is possible and, equally as importantly, what is impossible. Exploring what is risky and dangerous through play is essential if we want our children to be able to acknowledge and accept the limits of reality.

There is a huge element of emotional exploration that goes on during this sort of play. Through power struggle and combat children can put themselves into semi-real situations that allow them to experience and combat negative emotions. 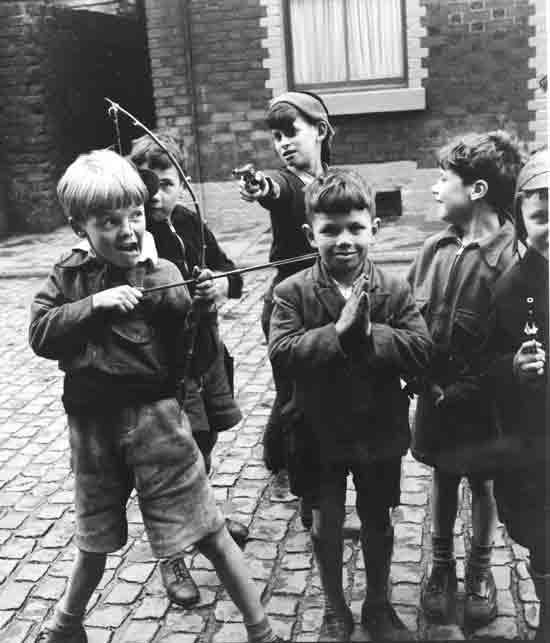 As adults we tend to me far more literal in our interpretations of children’s Superhero and weapon play, so when we see play fighting we see violence and aggression as the main catalysts for the play, which is rarely the case. I am not saying that play fighting doesn’t sometimes turn into actual aggression, but that was not the intention when the play started out. If it was then it wouldn’t be play, it would just be a fight!

By it’s very nature this sort of play involves struggle, chase, competition, noise! It is often adrenalin fueled play, there is a high level of thrill for the children taking part so it will be fast and loud. We cannot penalize children for that. If we accept that this sort of play is going to take place then we need to make provision for it, birth inside and out, and make sure that the whole team have clear expectations about what is acceptable and what isn’t.

In cultures where they do not have guns, it is interesting to note that children still engage this this type of play only their guns are replaced with spears, bows and arrows. It is the same symbolism.

Whether we like it or not. For the vast majority of us guns our part of our everyday life and culture. Our children are surrounded by them in the images that they see and the television that they watch. Even programmes aimed specifically at children contain characters with guns or their symbolic equivalent.

The question that we have to ask ourselves is: when our children are engaged in gun play, are they practising to become a man with a gun or are they just exploring emotions such as control, risk and a sense of power. Lots of our children’s essential emotional connections, consolidation and development can be made through fantasy play. The more opportunity they get to rehearse them, the more proficient they will get at managing them. 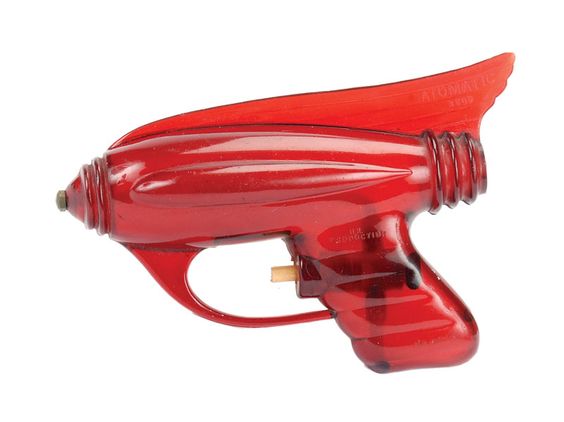 Through Super hero and weapon type role play children can learn to manage their own feelings by displacing them. They can make things turn out as they want them to, reinvent the truth and explore other possible outcomes that wouldn’t be possible in ‘real’ life where there is only one.

Wrestling, chasing, play fighting all help children to experience ‘safe’ danger assess risk and take appropriate action. As a species we are ‘hunter gatherers’. Much of the way that children play is grounded in instinct and an innate desire to hone our survival skills. Our experience of current culture just dressed them differently from our days in the cave!

Most often, but not always, these children are boys who are attracted helplessly to this play for five key reasons:

It is not that girls don’t have desires to experience and experiment feelings of power and control, but they tend to express their feelings more through language and relationships than they do through physical play. There has been significant research and discussion about why this might be. The root most probably lies in the social stereotyping that boys and girls experience from birth.

Girls are encouraged not to be as aggressive in their physical behavior and to take on a ‘different’ role which is socially acceptable for their gender. But, you cannot eradicate the need to explore innate emotion and use of language is the next best thing.

The truth is, almost anything can be a gun, a pointed finger, construction, sticks and balloons are easily used as guns, swords, light sabers, magic wands. Weapons are on the whole very easy to create. 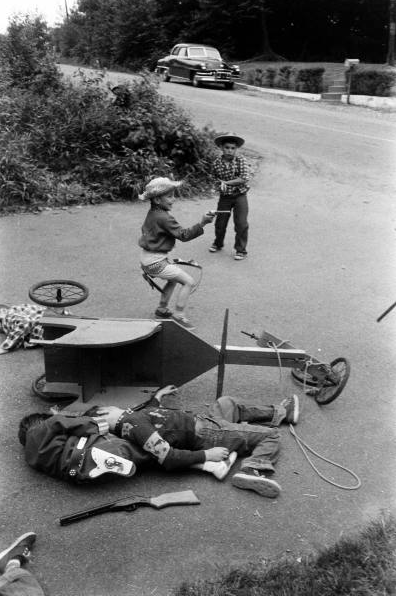 What children soon realise is that with their creation of a weapon comes an immediate sense of power. This is primarily because of the association that adults and other children have with weapon play. If you point your gun at me and say ‘bang’ I might drop down dead (you have all of the power), I might run away (you have all of the power) I might say ‘ I hope that is not a gun?!’ (you still have the power because you solicited that response from me). Not only are you amassing a catalogue of possible emotional responses to your actions, you are also learning a great deal about communication and how you can communicate your thoughts and feelings to others in a variety of ways, some with more success than others, but all valid nevertheless.

There are two key key things that really help in the management of this type of play.

The first is to give it value. It will never work if you just walk in and say ‘right, from tomorrow we are promoting gun play!’ All of the adults involved have to be really clear about why you are supporting gun play as a setting and the many benefits that can be gained from it.

I often find in my work with settings, that once adults are more confident in what it is that they are actually looking at, they are far more able to facilitate that play effectively.

The second is to create a policy before you start. It is often through the discussions that come about when you are creating a collective policy that you can iron out misconceptions and explore possible anxieties. If your whole team is not on board then it is likely that the initiative will be less successful and could ultimately fail..

I often (too often) find myself saying ‘High level attainment comes from high level engagement’. If we disengage our learners then we are significantly jeopardizing their potential for their attainment. 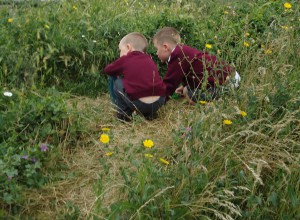 Often weapon play is referred to as being low quality or ‘empty’ play as it just seems to involve aggressive interactions. Tina Bruce published 12 indicators of quality play (see below). If you match these to the sort of experiences that children have during weapon play you can see that it is anything but low quality or empty. It has the potential to be the complete opposite.

The 12 indicators of play

The following indicators are adapted from two books on play published by Tina Bruce (1991, 1996):

9  having a personal agenda

All of these you will see in abundance during superhero and weapon play. For me now, it is a normal part of development for lots of children and as such should be recognised and supported.

There are lots of articles to get your teeth stuck into if you do an internet search. Here are a few books that I also found useful

Here is an example of a  Weapon-Super Hero Play Policy. It is by no means perfect, but it will get you started.