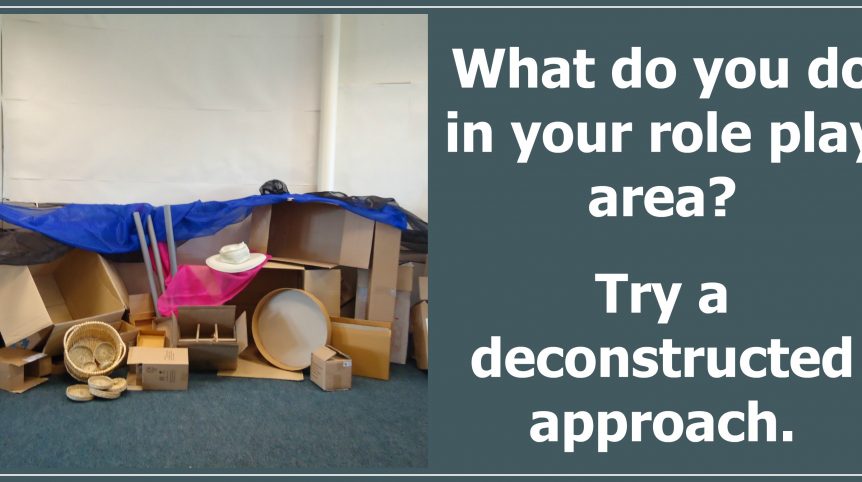 We were talking about a deconstructed approach to to role play in Year One at my transition conference yesterday, so I thought I would repost this  blog post that explains a bit more about it…

This week on my travels I was working with the Nursery team at Church Drive Primary. We were looking at lots of aspects of F1 practice including environment and set up for this time of the year.

The F1 space there is small, but perfectly formed! Kathryn and her team have worked really hard to make the space feel as purposeful and linked to children’s learning and interests as possible.

Even though the Point of Entry data is nowhere near complete yet, Kathryn is using her ongoing observation and assessment to make sure that the space is addressing any of the primary needs that have been identified.

One of the big areas that they are already working on is talk, language, social skill and interaction.

As a result Kathryn has given almost a third of her (diminutive) space to Role Play and Small World opportunities – both heavily linked to children’s interests as well as adult stimulus.

What I really liked about this space is that she has created a ‘familiar’ role play opportunity and then linked that to a completely open ended role play space that has been enhanced to reflect the preferences of the children and all of the interestting ‘stuff’ that is going on in Nursery. The space allows for lots of really open ended play and mark making, but when Aidan fell over, the children’s love of a story was the prompt for a box of enhancements to take advantage of their interest. Kathryn and the team have also started a display within the space to explain their approach. This display will grow in response to there play. When it comes to quality role play, many of you will know that I am a huge fan of a ‘deconstructed’ approach. Deconstructed role play can be truly amazing when done well. When done badly, it is just a pile of squashed cardboard boxes in the corner of your room. deconstructed role play – where anything can happen!

My starting point with EVERY area of provision that we decide we are going to set up in our learning spaces is to ask 2 simple questions: ‘Why do we have it?’ ‘What is it for?’

Why do we have a sand area?

Why do we have a malleable materials area?

Why do we have a role play area?

Once you can articulate why you have it and what you have it for, planning for it becomes a much simpler task!

So, why do we have a role play area?

Effective role play ensures ‘Children can try out risky ideas in a safe universe. They can explore boundaries, make sense of their world and develop their own identity. Children are also really exploring concepts that are very important to understand’ (Anne Flemmert)

Through role play children are  learning to understand very fundamental principles of our society and how it actually functions; what the rules and routines of more traditional things are. Role-play is vital because it allows children to revisit familiar and unfamiliar events whilst also supporting the development of a their imagination. Some of their role play will be very real and familiar (like ‘house’ and ‘dogs’) and some will be complete fantasy.

So a good role play space should allow children to experiment with familiar and fantasy every day. To role play anything you need to know it well or be able to imagine it.

So, for me the question around role play is always ‘How many of your children live and work in a [insert role play theme]? This could be Post Office, Vet, Chinese Restaurant, Garden Centre, Travel Agent, Cafe, The 3 Bears House…the list goes on.

If the answer is less than 95%, how is it an effective role play space? I cannot role play what I don’t know or can’t imagine. Therefore give me a role play space that allows me to revisit what I know, follow my interest and expand my imagination. It is hard to play dinosaurs in the Travel Agent – especially when you keep sending me out for using my ‘outside voice’!

As with all areas of provision, we need to understand any patterns of child development that are likely to show themselves through children’s play and make sure that we have provision in place to support them.

Some examples of the Development of Role Play  (not exhaustive and not set in stone!)

At this stage, child is beginning to collaborate together and play becomes personally orientated rather than object orientated. How do children play in Role Play spaces

up to 3 years old

Therefore, the more themed your role play provision is, the less opportunity you give children to develop their role play skills. Enhancement it the key! Create a role play space that is so open ended that it can be anything and anywhere depending on who is playing in it. Then add a selection of resources that are linked to something you are talking about (the post office) or something that is interesting the children (Frozen), so that they can be used as a teaching prompt as and when appropriate. What does a good deconstructed role play need?

( If you just stick 3 cardboard boxes in a corner then this isn’t deconstructed role play and you will find that your play isn’t great and your boxes get squashed!) The biggest barrier to deconstructed role play that I come across is the fact that some adults don’t find it as ‘pretty’ as a nice café with a gingham table cloth and a vase of plastic flowers, which is a shame, because in terms of educational benefit and potential for learning it beats a café hands down! (Plus you can always have a café enhancement box with your gingham cloths and flowers in it – having said that…don’t be surprised if the cloths get used as capes and the flowers as guns – because who wants to lay a table when you can be a Super Hero?)

Have fun collecting your boxes and gathering some good ‘stuff’ to support and expand children’s play and imagination!

11 Comments on “What do you do in your Role Play?”