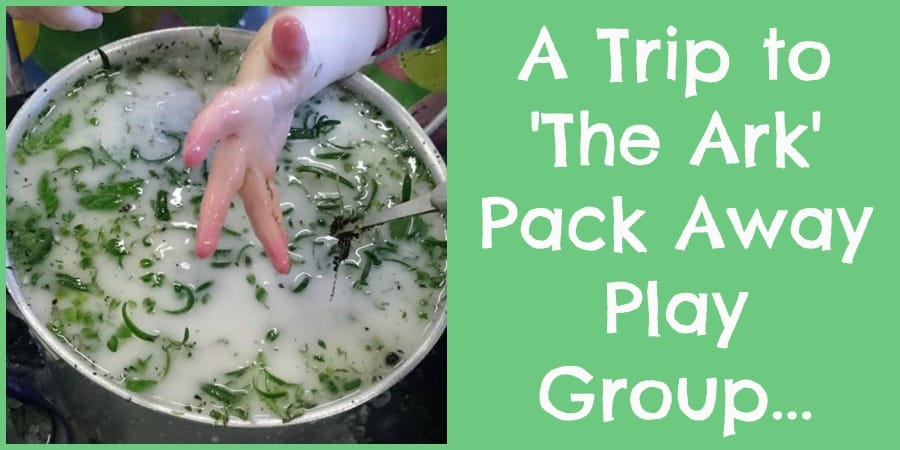 Last week I had the great pleasure to get to go and just play at The Ark pack away play group in my local village. The Ark is run by Sally, Nigel and Janice who some of you will know better from Facebook as ‘Early Years Mathematics and Literacy’. If you haven’t come across their page before, have a look here. As is often the tradition with a pack away, the play group is held in the church hall and all the resources have to be put out and then packed away again every session.

Resourcing can be a huge issue for pack aways, often they have a limited budget therefore the buying of the resources can be a stretch, but also if you are limited for space and you have to pack everything away then before too long you are going to run out of storage. We all know how quickly a cupboard seems to fill up with random ‘stuff’ in Early Years. That is why ‘tidy the stock cupboard’ is always on the job list no matter what the time of year!

Having said all of that – necessity is indeed the mother of invention and The Ark team had been very inventive with their resources and their space. There were lots of things for the children to get their teeth stuck into but I really liked the fact that The Ark were using a  deconstructed approach to their role play with some specific enhancements linked to theme and children’s interest. There was no shortage of ideas for inventive role play and lots of  language development and cooperative learning. To add a bit of interest to the church hall walls the team have used these shower curtains with ‘winter’ trees on them. The trees on the wall are a link to the trees outside the window and previous observations that the children had done about winter.

As you will know if you follow Early Years Mathematics and Literacy, The Ark always has some sort of interesting ‘tough spot’ provocation on the go. Today it was cornflour, herbs and water with lots of tools for cutting, mixing and stirring. The week before I visited they had had boiled potatoes and potato mashers for exploration. This week the potato interest continued with a potato weighing station where the children had access to sets of balance scales and paper bags  (and LOTS of potatoes). I could have spent all day in that one area. I managed to be included in some shopping play, weighing play, exploration of the mechanism that made the scales go up and down, the sound of and the rhythm of the scales when you pushes them up and down, talking, measuring and even ordering by size – not to mention a fair bit of rolling! Well, who doesn’t want to find out which potato would roll the furthest? And of course, no activity was exclusive to one area. The potatoes soon found their way into role play and into the ‘soup’ which was now being made on the tough spot. The soup station had started out with some quite considered mixing and herb snipping from it’s first visitors. By an hour and a half (and several children) later, extra water had been requested, the herbs were bald! All the leaves, stalks and soil had now gone in. The essential ingredient that was missing was of course potatoes, so someone was dispatched to go and collect them and in the soup they went. Sieves and colanders were then added to the play to see if the children could find a use for them – which of course they did. Rather than picking the potatoes out with their fingers they began to strain them out. First having to work out which pan would be big enough to hold all of the water. No one is right every time – so there might have been the odd drop or two of ‘soup’ that ended up in the tough spot or on the floor – but that is what it is all about! The session was just not long enough!

Alongside the soup making and potato investigation there were lots of other activities to have a go at. Painting on fabric (and other textures) was particularly popular. I had the great pleasure of reading the story to end the morning. Then we had a quick snack and it was time for home.

As The Ark is literally 5 minutes walk from my door, I am sure I will be visiting again soon – if only for some more potato soup!

Thanks Sally, Nigel and Janice for letting me come an join in the play. Keep up the good work!

3 Comments on “Trip to The Ark – Pack Away Play Group”