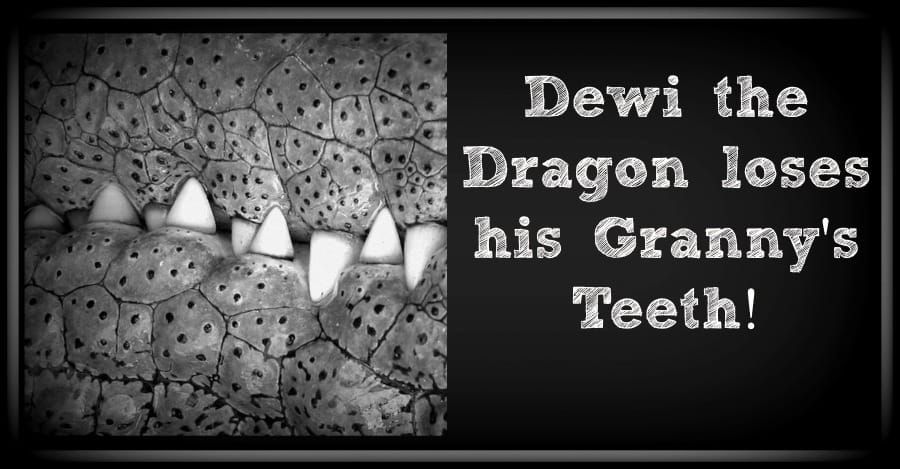 This week Granny’s Teeth turned up at Alexandra CP School, Wrexham. Here’s what we got up to!

We are having some building work at our school so Nursery and Reception classes decided to go out to look at the machines and see what was happening on the building site. We met Keith the Builder, who was very busy digging. While we were watching he found something in the soil. He stopped digging and pulled out a box! He told us that the box didn’t belong to him and passed it over the fence to Mrs. Lloyd the Nursery teacher. When she opened the box, inside she found…….some teeth! We couldn’t believe it! We went back to our classes to talk about where the teeth might have come from, who they belonged to and what they were doing on our building site! After lots of talking, thinking, drawing and writing, we eventually decided that the teeth belonged to a dragon. We decided to make some signs in case he came looking for his teeth to let him know that we had them in Nursery!

We left the signs by where Keith the Builder had been digging and when we went back to check the next day they had gone! We thought that maybe the dragon needed a bigger sign left on the fence so he could see it from the sky when he flew past so we got busy drawing and writing – it was huge! When we put this sign up on the fence, Seren found some paper – it was a letter from Dewi the Dragon! We couldn’t believe he had actually written to us. We were so excited we ran back to Nursery to show everyone!! The letter explained that the teeth belonged to Dewi’s Granny and he had dropped them when he flew over school afew weeks ago. He said thank you for our signs but he needed a map to show him where to find our Nursery class and he would come and collect his Granny’s teeth on Friday! We had to get busy and quick! We needed to make Dewi a map so he didn’t get lost! We have been reading some books about dragons to find out more about them. One of the books told us that dragons like to eat doughnuts! Dewi had also asked us to make something to carry his Granny’s teeth in as he only has short arms! We were very busy in our junk modelling area putting something together for Dewi. Sophie thought that some tissue paper at the bottom would look like dragon’s fire. We also thought that a long string would hang over Dewi’s arms so he could carry the box easily. We left the box with the teeth, and some doughnuts for Dewi on our carpet. Then we left the maps by where Keith the builder found the teeth and we also left a trail of Rice Crispies on the floor, just for good luck (in case our maps were a bit tricky for a dragon to read.) On Friday morning when we came in to Nursery, the teeth had gone!!!! There was a carrier bag of mini doughnuts left and we thought Dewi must have left them to say thank you. When we ate them later on we all shouted up to the sky to say thank you to Dewi in case he was flying past! Whenever we are outside now we always look up in the sky to check for dragons – make sure you keep an eye out for Dewi too!

2 Comments on “Dewi the Dragon loses his Granny’s Teeth!”