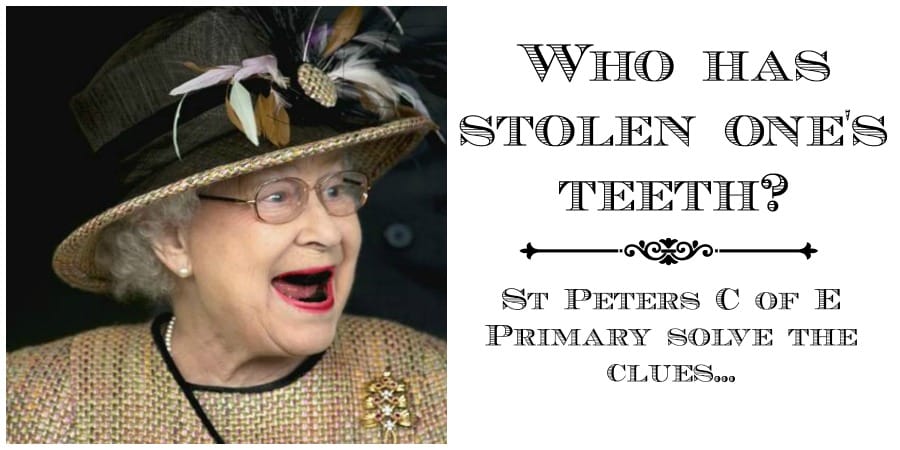 We are a small school based in a beautiful village called Farndon, which is next to the River Trent near Newark in Nottinghamshire. We have a mixed Foundation class with 30 Foundation 2 and 8 Foundation 1 children and we absolutely love new experiences and adventures!

On the day Granny’s teeth arrived they were brought to our class at the same time as a huge box which had also just been delivered. Obviously the children asked ‘what’s in those boxes?’ This led to us playing a game of what’s in the boxes? We worked in teams to make some pages all about our ideas and added these to our large floor book. We then opened the large box and discovered it was our new resources for our woodwork station. We then opened the small box, inside was a wooden box with something wrapped in a handkerchief – the children asked lots of questions – whose it it? Why is it here? What is it for? What is hiding in the handkerchief? It was then home time….

The next morning the children very excitedly entered school wanting to see what was hidden in the box….Sophie was chosen to take a sneaky peak, she described what she could see without telling the rest what it was “it is shiny and hard”, “you use them to eat”, after lots of guesses and a few more clues someone finally shouted out “TEETH, is it teeth?”

Once we had passed the teeth around and talked about them the children started to discuss who they might belong to, they even had to rule out that they were not Bob the dogs. Someone made the suggestion that they may belong to the queen and that she may have left them here during her visit to our classroom last week. According to Alfie “the queen is a granny and granny’s have false teeth”.

During the rest of the morning several of the children chose to write all about who they thought the teeth belonged to. In the afternoon we read the story of Elliot the Midnight Hero – in this story a criminal mastermind steal lots of things and Elliot has to turn into a superhero detective to solve the crime! The following day….something terrible had happened….our classroom was a crime scene! The children had to make their own capes and turn into Super hero Detectives in order to gather the evidence of what had happened …. THE QUEENS TEETH HAD BEEN STOLEN!!

Following the discovery of the problem the children worked together to follow a range of clues, and find the queens teeth (which were buried under a log pile in Forest Schools!)! Once the teeth had been found the children decided to build a range of Traps and even a prison to keep the Robber away from our classroom and the queen’s teeth. They also made Wanted posters and signs which they put up around school! Finally the children worked with Yr1 and Yr2 to make a eye witness video all about the incident!

We had such a fantastic time with the ‘Queens’ Teeth, thank you!!

You are very welcome. Just glad the Queen got them back in time to eat her birthday cake!