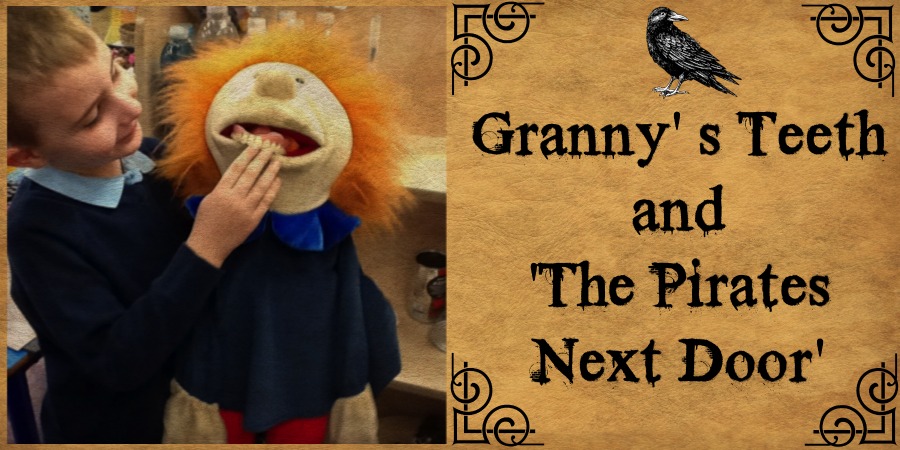 In Reception 2, we have been exploring Pirates Ohhh Arrrr!

We began by reading a very interesting story ‘The Pirates Next Door’. We described the characters and the children were particularly interested in the character ‘Nugget’. They described her as ‘Cheeky’ and ‘Cute’. They were also drawn to ‘The Grandpa’ and questioned why he couldn’t leave his pirate ship?

The following day the children discovered a special letter and a treasure map in Miss McIntosh’s magic jewel jar. But where would it lead to? We arrived at the outdoor sand pit only to find…. A pair of teeth!! The children were amazed; they asked questions and together came up with some fabulous ideas of which they could belong to. The children had lots of fun exploring the teeth, using them in our continuous provision and they were never far away! We needed to make sure they were always put back in their special box and in the correct place chosen by the children (the sand pit). Some of the children wrote some lovely ideas of where they think they will be hiding next. We pretended we were pirates stealing the treasure and they constructed their own ship and plank! We wouldn’t want anyone to steal them would we?

Until.. Jim Lad from our pirate story came into our classroom to find them. They were his Grandpa’s teeth! Jim lad is bringing us special treasure over the weekend and we can’t wait to see what it is. Sofia noted down some of our super ideas and Lacey wrote him a special message. We hope he comes back to visit us soon. The teeth have been on a very interesting journey!

Thank you so much Reception 2! I hope Jim Lad’s treasure was as exciting as it sounds…

One Comment on “Granny’s Teeth and The Pirates Next Door!”